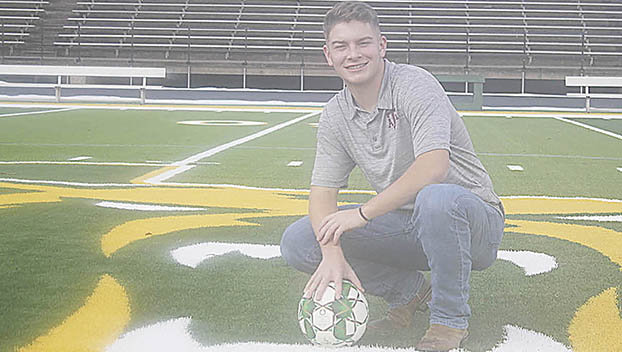 LC-M senior Ace Vandervoort is a proud member of the LC-M soccer team along with being in Student Council, National Honor Society, the Interact Club and the Debate Team. (Van Wade/Orange Leader)

LITTLE CYPRESS — Little Cypress-Mauriceville senior Ace Vandervoort is a bright spot on the campus through his involvement in so many activities.

Vandervoort serves as a Student Council officer. He is a member of the National Honor Society, the Interact Club, the Debate Team and the Bear soccer team.

He spends a lot of his free time with the Boy Scouts and is close to earning his Eagle badge.

“I love to keep myself occupied in a lot of different areas, it allows me to learn so much from all kinds of different people,” said Vandervoort. “I really like to put all I can into everything I’m involved in, whether it is helping people or in friendly competition.”

“He throws himself into a lot of things, excels in each one of them and is a great leader in each group he is involved in,” she said. “He’s got a good head on his shoulders and has made so many good decisions in efforts to make our whole school better. I even keep him busy as an office aid. He’s a true go-getter.”

Vandervoort said some of the best things Student Council does are Dress-up Days. They ignite the student body with amazing costumes and get-ups.

“We just recently completed the Trial of Trees, with all kinds of Christmas trees lining up our hallways to get everyone into the Christmas spirit,” he said. “We’re getting prepared for our Winter Formal coming up soon, too.”

Vandervoort thrives in the National Honor Society because he pushed himself grade-wise.

He also encourages younger students about the importance of good grades.

One of his best moments was speaking about leadership at the Induction Ceremony this year with 59 new members. 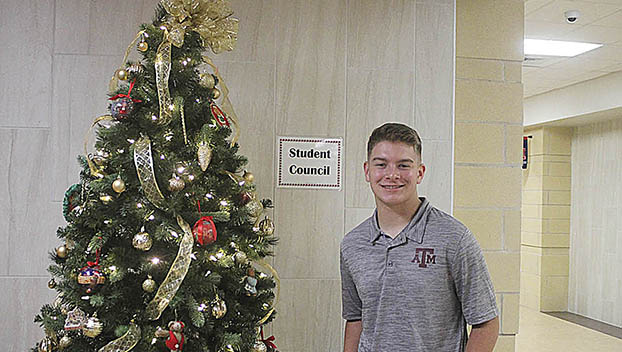 “We also get in 20 hours of community service each year,” he said. “One of the best times with those hours is going to Mauriceville and Little Cypress junior highs, along with other groups and organizations, and telling the younger ones what high school is all about.”

Vandervoort has been involved in Debate since he was a sophomore, about government structure. He studies government procedures and how it impacts actual law.

“It helps me build an argumentative structure that I can present,” he said. “I think being in debate gives me such a better understanding of the world around us, and it has allowed me to see different sides to every story.”

He will participate at the State Debate Meet in Austin in January.

Perhaps the most fun organization at school for Vandervoort is the Interact Club, which falls under the Rotary umbrella.

“We raise money and make things for great causes,” he said. “We were in charge of carrying the buckets around during our Pink Out Football Game this past season and raised a ton of money for Breast Cancer Awareness. Just recently we made a bunch of dog blankets for a local animal shelter.”

He started as a Cub Scout in third grade.

Learning leadership skills and working together as a team have been the most rewarding.

“One of my favorite experiences was participating in a Philmont Scout Ranch Hike in New Mexico,” he said. “It was a 12-day, 135-mile trek, and you learn so much about yourself, other people and how to think and figure out things as a team. I’ve been a Troop Guide the last two years and I’ve learned to plan out things and map out strategies, which has helped me with debate, too.”

Vandervoort is also ready to shine for the Bears soccer program as a senior right fullback and stalwart on defense.

This is his 15th year playing the sport.

“We have a lot of talent returning, so I feel like we can make another run again and, possibly, get even further in the playoffs,” Vandervoort said.

Vandervoort has had a strong support system in parents Jerry and Mindi Vandervoort.

“I’ve learned that all things are possible through hard work and great spirit,” said Vandervoort. “I’ve always looked up to them, and they are the types that want to know what I’m doing or involved in each and every day. That’s great to have. They are always interested in what I’m doing and like it when I’m involved in things that make me happy.”

Vandervoort wants to continue his education at Texas A&M University, joking he came out of the womb wearing a Texas A&M. He plans to join the Texas A&M Corp of Cadets.

“I’m so intrigued with the Bush School of Government and Public Service there,” said Vandervoort. “I want to major in political science, get my Masters and see what happens from there.”

Vandervoort, meanwhile, is going to cherish his final school year as a Bear.

“I may be partial, but I think LC-M is the best school district in the 409,” said Vandervoort. “The entire school, from the students and the teachers, has so much chemistry, and we all gel together. I’ve learned so many life lessons here throughout the years that I don’t think I would have gotten anywhere else.”