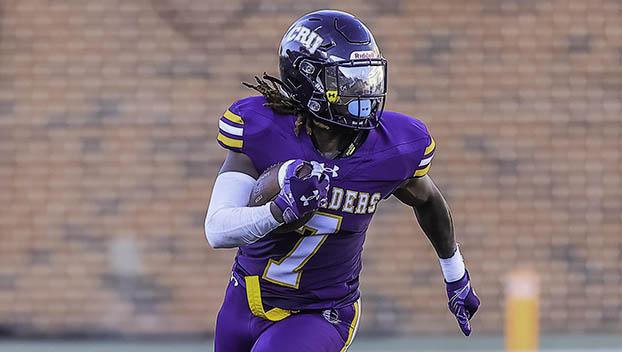 BELTON – The University of Mary Hardin-Baylor football team used a strong fourth quarter to earn a 41-28 win over Bethel University in Belton in the NCAA Division III National Quarterfinals.

UMHB outscored the Royals 24-7 in the final frame to earn the quarterfinal victory. The Cru improved to 12-1 on the season, while the Royals ended their 2022 campaign at 10-3.

Miller hauled in six passes for 144 yards and a touchdown.

Miller and the Crusaders move on to face North Central College in the National Semifinals at 2:30 p.m. Saturday.

“I am really proud of how our kids hung in there,” Head Coach Larry Harmon said. “KJ had an electric play that got the guys going. Nobody was pointing fingers, no negative comments, the crowd got into it. Everyone was so positive and ready to do their part.”

Bethel took the lead at the 3:02 mark when David Geebli rushed for six yards and the score. Kenneth Cormier, Jr. rushed for 16 yards and the equalizer at the 11:09 mark in the second quarter to even the score at seven. The Royals responded with a 24-yard pass from Jaran Roste to Joey Kidder for another lead before Aphonso Thomas responded with a 17-yard scoring run to even the contest with 2:21 left to play in the first half. The Royals saw a scoring opportunity as time expired but Dorian Williams intercepted a pass at the 5 to preserve the knot.

The Royals scored on their first offensive possession of the second half on a 25-yard pass to Micah Niewald. UMHB responded with a 10-play, 62-yard scoring drive. Miller opened the drive with a 19-yard grab and followed that with a 30-yard catch on third-and-ten to keep the drive alive. Miller caught another pass and got the Cru into the red zone before Anthony Avila got the Cru on the board with a 23-yard field goal.

Joey Kidder responded for Bethel with a nine-yard grab to open the fourth quarter. UMHB responded with a 65-yard touchdown pass from King to Miller on the next play to pull within five. UMHB’s defense stood strong on the next drive, forcing a three-and-out and giving up just one yard to the Royals. UMHB ensued with a five-play, 50-yard scoring drive, highlighted by three Cormier, Jr. rushes for 29 yards and the touchdown.

Titus Dunk ended the next Bethel possession with an interception at the Cru 48. Thomas rushed five times for 52 yards in the next possession, scoring on a 26-yard rush up the left sideline to put the Cru up by 10.

Defense held the Royals to negative yardage on the next drive as Pete Smith dropped the quarterback for a two-yard loss. Roste’s fourth-down pass went incomplete to give UMHB the ball back at the Bethel 23. UMHB drove to the 19 with Avila capping the drive with a 36-yard field goal for a 41-28 advantage with 3:21 left to play.

UMHB totaled 449 yards of offense in the contest, with 276 yards in the air and 173 rushing yards. King completed 20 passes for 276 yards and one touchdown, breaking both the single-season completion record (241) and the single-season passing yards record (3429).