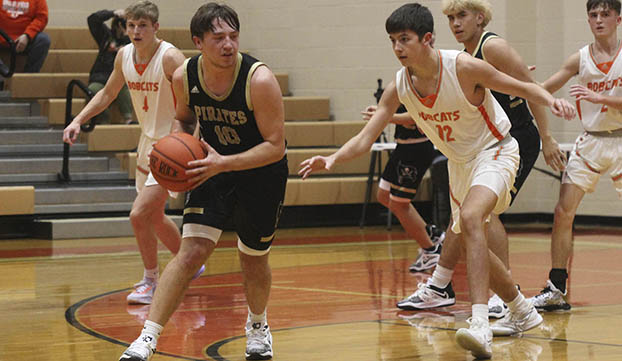 Vidor's Camden Young (10) had a nice outing against Warren Tuesday night. Young and the Pirates will be in the Orangefield Tournament Thursday through Saturday. (Van Wade/Orange Leader)

VIDOR – The Vidor Pirates made quick work of Warren in non-district hoop action, rolling to a 70-47 victory over the Warriors.

Bryce Loftin poured in 26 points and had three steals for the Pirates.

Zander Lindsey filtered in 16 points and swiped five steals. Brayden Root muscled his way to a double-double with 11 points and 11 rebounds, while Camden Young had eight points and dished off five assists.

The Pirates compete in the Orangefield Tournament Thursday through Saturday.

PORT NECHES – The Bridge City Cardinals were nipped by the Port Neches-Groves Indians 42-41 in non-district play.

The Cardinals will participate in the Orangefield Tournament Thursday through Saturday.

DAISETTA – The Little Cypress-Mauriceville Lady Bears hammered out a 68-28 road win over the Hull-Daisetta Lady Bobcats in non-district action at Bobcat Gym.

Rylan Thornton led the Lady Cardinals with 14 points and also led in rebounding. Whitney Cunningham filtered in 10 points, while Nicole Sasser led the team in steals.

The Lady Cardinals will host Jasper in their District 19-4A opener Friday.

Emily Totino had 11 points, five steals and three rebounds for Deweyville while Jill Thompson had four points and six rebounds.