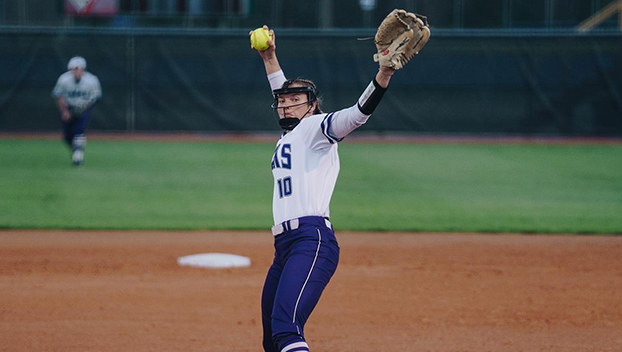 Former Bridge City standout Kassidy Wilbur has wrapped up a tremendous run on the mound for the SFA Lady Jacks and is enjoying teaching and coaching at Nacogdoches High School. (Photo courtesy SFA Softball)

NACOGDOCHES – What a run it was for former Bridge City softball standout and Stephen F. Austin University stalwart Kassidy Wilbur.

With the COVID year, athletes in NCAA sports were granted to have an extra year of eligibility.

However, Wilbur has decided against a fifth year as a pitcher for the Lady Jacks. Wilbur had offseason surgery and was not able to resume softball activities, prompting her to retire from the game.

The 2023 season would have been her “super senior” season because the NCAA said 2020 would not count against an athlete’s eligibility, because of the pandemic.

Wilbur picked up 79 wins in the circle at SFA.

“I so wanted to play that fifth season, go back to school and go for my Masters,” said Wilbur. “I had a problem with the bottom of my foot and went and got the surgery. But it was my push-off foot, which was tough. I knew I couldn’t get all the way back with that, so I decided to move on with what is ahead.”

What is ahead is coaching. Wilbur earned her degree at SFA and is now teaching chemistry and will coach softball in the spring at Nacogdoches High School for the Lady Dragons.

“I’m so exciting about being in the classroom and teaching chemistry class,” said Wilbur. “I’m even more excited about softball coming up. January can’t get here quick enough with that first practice.”

Wilbur finds herself in a good situation still on the diamond.

“The Nacogdoches head coach left to become an assistant at SFA and that opened the door for me,” said Wilbur. “I’m going to be an assistant coach this year and they want to groom me as the head coach the following year. They are going to let me run a lot of practices and get the swing of things. I love the sport so much and I can’t wait to learn the players and teach them and just have a lot of fun. They had a pretty good year last year, so I’m looking for even bigger things coming up.”

She will always be grateful for her time throwing the heat at opposing batters for the Lady Jacks.

“The championships and wins were always great, but what it all comes down to is the friendships I have collected along the way,” said Wilbur. “SFA is such a tight-knit school, and the community is great. It’s just a great place to call home. I had a blast being a Lady Jack. Now it’s going to be awesome to be a part of and coaching the Lady Dragons.”

As a senior for the Lady Jacks, Wilbur earned the WAC Conference Pitcher of the Year and was also First Team All-WAC. She finished with 847 career strikeouts and a superb 2.28 earned run average.

While helping the program to the WAC’s Southwest Division crown, she tied for the league lead in wins (19) while striking out a conference-best 219 batters. She limited the opposition to a .211 batting average while recording a WAC-high 37 appearances. In her 18 complete games she registered a league high six shutouts.

As a junior, Wilbur posted a 30-4 (1.08 ERA) overall record in the circle last season, a total that established a new single-season program record for wins by a pitcher. She pitched 24 complete games and 16 shutouts (13 solo) while also being recognized as the Southland Conference Pitcher and Player of the Year, the first time a Ladyjack collected both honors simultaneously.

As a sophomore during a COVID-shortened season, Wilbur recorded 81 strikeouts and a batting average allowed of .174 in her eight starts. She posted a 7-2 record in the circle with five complete game efforts. She tallied three outings of 10+ strikeouts and finished with an ERA of 1.73.

As a freshman she was thrown into the SLC fires immediately and appeared in 40 games and made 30 starts. She finished the season with a record of 20-16 while pitching 229 innings. She struck out 256 batters and held opponents to a .206 batting average, racking up eight games of 10-plus strikeouts.

Wilbur led the Cardinals to four consecutive district championships and four playoff appearances, aiding Bridge City to the fourth round of the playoffs as a junior in 2017. She went 23-5 with a 0.66 ERA as a junior and 22-4 with a 0.89 ERA as a senior. She also blasted 22 home runs and collected 68 RBI over her final two prep seasons, holding a .430 batting average as a senior with 21 extra-base hits.