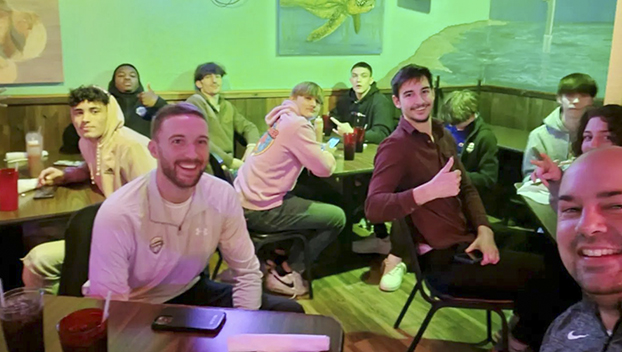 The LC-M basketball team always has a blast on their trip to the Aransas Pass Tournament, staying at a cabin close to the beach and enjoying some nice dining. (Photo courtesy Brad Jeffcoat)

Over the past few years, several of our local basketball teams have been taking some nice travel trips to various tournaments.

For the coaches and players, it’s a great experience to see new areas, meet new people and play some quality hoops.

This week alone, the Little Cypress-Mauriceville boys are playing in the Aransas Pass Tournament, while the Orangefield girls are in the West Tournament.

Over the holidays, the Orangefield boys will venture to the Franklin Tournament.

“We get a whole lot out of going to the Aransas Pass tournament,” said LC-M boys coach Brad Jeffcoat. “The Aransas Pass coaches and team welcomes us with open arms, and they have tremendous hospitality.”

It gives the Bears a chance to see some stout competition and how other teams play from around the state.

“It’s good to get away from the area, because a lot of times our local tournaments have teams we will see later in district, and you kind of don’t want to show all your cards to those guys,” said Jeffcoat. “Aransas Pass has a lot of talented teams. The only local team there is Hardin-Jefferson.”

The Bears also enjoy some perks.

“We’ve always rented a cabin near the beach, and the kids get that atmosphere,” said Jeffcoat. “We’re able to hit some good restaurants. It’s always a great experience, where the kids get to know everyone better and it really helps us gel.”

The Orangefield boys are playing at the Nederland Tournament this week, then host their own next week. On Dec. 27-29 they will make the trek to the Franklin Tournament.

“We’re seeing some nice competition against some bigger schools at the Nederland Tournament this week,” said Bobcats coach Jake McDonald. “We’re excited to bring our own tournament together next week. But that trip to Franklin each year is really awesome. We’ve played some ranked teams there in recent years and we’ve won a few and dropped a few. The best thing about it is that it helps the team bond. We’re a more experienced group this year, so I think it will be a blast.”

Here are some results of early tournament play that has started and will last throughout the weekend:

Against Sinton Ben Elliott and Alantheon Winn each posted double-doubles for the Bears (7-1).

Elliott led the way with 19 points and 10 rebounds while Winn notched 11 points and 12 boards.

In the blowout against Robstown, Elliott led the way with 22 points. Winn filtered in 16 points, while Da’Marion Morris and Noah Fuller added 12 points, apiece.

NEDERLAND – The Orangefield Bobcats held off the Beaumont Kelly Bulldogs 65-64 in their first game at the Nederland Tournament.

Pete Ragusa had 18 points and nine rebounds for the Bobcats (5-1).

EVADALE – The Bridge City boys are competing in the Evadale Tournament this week.

On Thursday the Cardinals fell to East Chambers 64-42 in their opener and dropped a 59-52 decision to Jasper. Against East Chambers, Walker Britten paced the Cardinals with 20 points. Aiden Guiterrez had seven points and Aaden Bush added five.

Against Jasper, Britten poured in 18 points and dished off four assists. Guitterrez popped for 12 points while Jagger Carlin pulled down nine rebounds.

NEDERLAND – The Vidor Pirates dropped a 62-51 decision to the Hamshire-Fannett Longhorns on the first day of the Nederland Tournament.

Bryce Loftin led the Pirates with 20 points and six rebounds.

In other tourney action, the WO-S Mustangs fell to Aldine 77-43 at the YMBL Tournament.

EVADALE — The Bridge City Lady Cardinals split a pair of games at the Evadale Tournament Thursday.

They fell to Kirbyville 28-27 in their opener but came back to defeat Beaumont Legacy 40-30.

Against Kirbyville, freshman Kaylee Britten led the way with 13 points and had six rebounds while Kailey Nelson had eight points and nine boards.