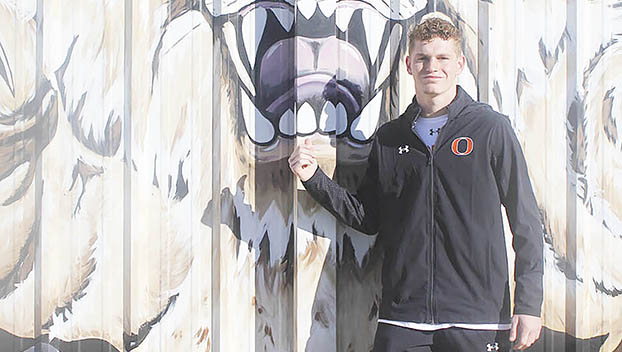 Orangefield senior leader Leyton Loft is an inspiration across the campus, utilizing his faith and energy. (Van Wade/Orange Leader)

He is the president of the Future Christian of America at Orangefield High School. He’s a proud member of Future Farmers of America and is a member of the National Honor Society.

And last but not least is that he is a tremendous athlete who plays football, basketball, cross country and track and is even going to give tennis a go this year.

“My parents got me involved in church at such a young age, and I’ve been going every Wednesday and Sunday pretty much ever since,” said Loft. “I feel faith is so important to have, especially these days. Church keeps me busy. I work the sound booth a lot. I’m one of two event coordinators that plan youth group activities.”

Loft has being saying the pre-game prayer for his Bobcats football teams ever since he played in junior high.

“Leyton is such a wonderful kid and he is so inspirational in everything he does,” said Orangefield Athletic Director Josh Smalley. “It’s really great to see a kid carry out his faith in this day and age, and he really gives everyone a lift, whether it is in sports or around campus.”

Loft said his dad coached during Little League and prayed during those games.

“I always admired that,” said Loft. “Then I was thrilled when the coaches started to let me do it in pre-game in middle school. Last season was awesome, being a senior and all, and getting to do it for so many great teammates and coaches. I talk to kids around campus about coming to church and talking about faith. I’m not the type that is going to push it on someone, though. You have to approach them lightly with it. Having faith can really motivate you to get going in your everyday life.”

Principal Rea Wrinkle said Loft is inspiring, warm and treats everyone with respect, from the students to the teachers.

“No one can pass him in the hallway without seeing a smile on his face,” Wrinkle said. “His energy is what is so special. His motor is constantly running, and it is always in a positive manner, so much, that it is infectious. He’s like that in everything he is involved in.” 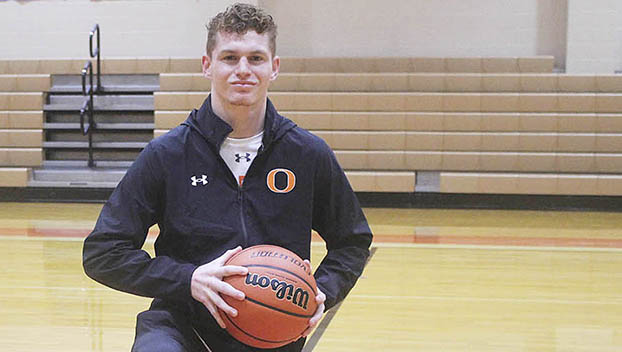 Orangefield senior Leyton Loft is involved in basketball season, one of the five sports he plays while also being in FCA, FFA and National Honor Society. (Van Wade/Orange Leader)

Parents Crystal and Daniel Loft have played a key role in Loft’s values.

He describes his mom as a strong woman with morals who keeps him grounded about what the most important things are.

“My Dad, he’s so strong with his faith and he’s not what I call a loud person,” said Loft said. “He leads by example, and I’ve always been so appreciative of that.”

Loft is a proud member of the National Honor Society and was just recently named to the Texas Coaches Association All-State Academic Cross Country Team.

“My grades are important to me, but they should probably be more important,” said Loft. “I’m involved in so much, especially sports-wise this year. But I’m keeping them up well. I’m looking to get some scholarships in the future.”

Loft puts in some service hours with the NHS as well.

“I get in quite a few hours working with my church and vacation Bible schools,” said Loft. “I’ve also been fortunate to help plant trees around the area and helping Mr. Chris Kovatch in setting up and breaking down the Lions Club Carnival.”

After his faith, sports is right behind that in his heart.

Loft was part of the district-winning cross country championship team this fall.

“That’s was awesome to be a part of something so special,” said Loft. “I call myself runner No. 5. They accumulate the top five runners places to get to the team scores.”

Loft was running cross country the same time he was a major contributor on the football team.

The Bobcats won an outright district title for the school for the first time since 1988.

And they had a stout outside linebacker in Loft, who made First Team All-District.

Loft is now churning on the basketball team, where he is a key contributor.

In the spring, Loft will continue his track prowess along with picking up tennis for the first time.

He captured the district title in the high jump the last two years.

“My goal, of course, is to win district again,” said Loft. “I want to go further past Area and Regionals this year. I feel if I can improve from two to four inches I can do it, just got to put in the work to achieve it.”

Loft has plans he would like to achieve after he graduates.

“I really want to major in zoology or marine biology, because I just love working and dealing with animals,” said Loft. “I wouldn’t mind continuing to high jump for a college, too. I’m going to just continue to try my best by keeping up my grades and building myself up and try to get some scholarships along the way and see where my faith can take me.”