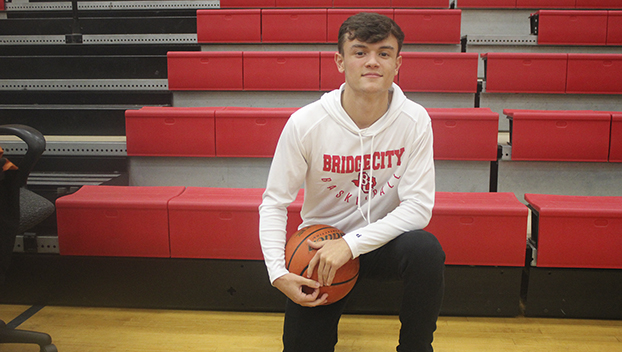 Bridge City senior Walker Britten has been a tremendous influence for the Cardinals with his three-point shooting skills and leadership qualities. (Van Wade/Orange Leader)

BRIDGE CITY – If Golden State shooting legend Stephen Curry got a glimpse of Bridge City senior guard Walker Britten, he would be thrilled at what he would see.

Britten has always been a long-range sharpshooter, but his game has grown even more heading into his last year donning the Red & White.

“I have spent so much time in the gym, and I feel like I can hit from anywhere, as long as I have a little space,” said Britten. “If I get really set, I have complete confidence that I can hit the shot.”

On Tuesday in a tough 52-51 loss to Big Sandy, Britten tallied 33 points and hit nine three-pointers, breaking his previous mark of eight that he connected on against Kirbyville last season.

“When Walker gets into that zone, he’s just so awesome to watch,” said Cardinals head coach Randall Robertson. “He’s got great form and a nice quick release.”

Britten is definitely taking a leadership role for the Cardinals this season and is one of two seniors on the team.

“We almost have everyone back from last season,” said Britten. “We really worked hard to gel better after last season ended and we played a lot over the summer in getting prepared for this year. I really like the way we are coming together. I want to be able to help put us in the best position to win, whether it is distributing the ball to my teammates or hitting big shots when we need them.”

Robertson says the best thing about Walker is how much he has matured. He got some nice experience as a sophomore on a great team and fit in nicely on last year’s team, which was trying to find its way most of the year because of youth.

“This year he is stepping up and has become a vocal leader on and off the court,” said Robertson. “He’s also a tremendous student athlete. He gets it done in the classroom and on the court.”

Britten reflects on learning a lot as a sophomore on a team that went 19-10 and won its first playoff game in 60 years, which was a win over always powerful Hardin-Jefferson in the bidistrict round.

“That team was so great to be a part of and those guys definitely groomed me,” said Britten. “There were several seniors that were so eager to push us to be the best that we could be. To me, that was the best feeling, to get that playoff win and be a part of something so magical. As a senior this year, I want to be that type of leader.”

Robertson says Walker is accepting the challenge to getting things going for the team.

“Of course, we know he can shoot, but this season he’s doing really good at finding his teammates, getting them the ball and moving our offense around,” said Robertson. “He’s like a second coach out there. I like to call him our see-it, fix-it guy.”

There is nothing quite like the feeling of getting hot, said Britten.

“When you get in a zone, you just feel like you can hit anything from anywhere,” he said. “I really have practiced hard to be able to shoot from long-range. I feel comfortable from the volleyball line on in.”

Robertson has enjoyed the shows Britten has put on the last couple years.

“Walker hit eight three-pointers against Kirbyville last year and he was hitting them from everywhere,” said Robertson. “When he was coming off the bench as a sophomore, he hit three critical three-pointers in the fourth quarter to help us beat Vidor. We kinda knew then that he could get hot and fill it up. Last year, he took some tough shots at times to try to keep us in games. This year, he seems so much more comfortable and relaxed and has more trust in his teammates.”

Britten enjoys learning and being around Coach Robertson.

“He really encourages me so much, especially when I get cold, and trusts me that I can bounce back,” said Britten. “He’s very patient with us in practices and brings a lot of energy, whether it is at practice or in games. We really feed off of that. He’s been great to play for.”

Britten has been a gym rat basically his whole life.

“I started in Little Dribblers when I was 5 years old and it seems like I’ve had a basketball in my hands ever since,” said Britten. “My Dad has been a big influence for me and has coached me a lot through Little Dribblers all the way up through playing on Select teams. I’ve been able to create friendships on those teams from playing with guys here at Bridge City and also with some LC-M and PNG players and some good players from Beaumont, too.”

Now Britten is focused on one thing, getting the Cardinals back into the postseason.

“Our district is tough, especially with Silsbee and LC-M, but we feel like we can compete,” said Britten. “We want to make the playoffs and we are striving to be one of those four teams that get in. We’re young, but we’re competitive and have some fight in us that will give us a big chance.”