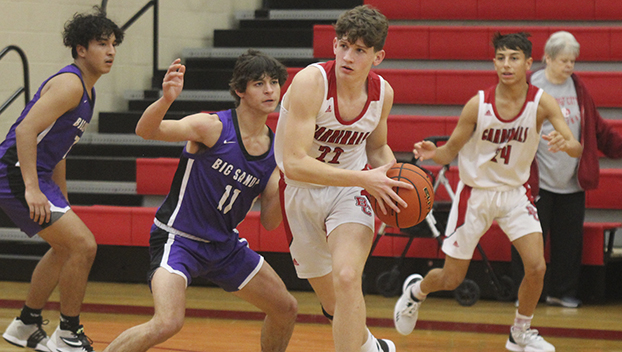 BRIDGE CITY – Bridge City senior point guard Walker Britten had the game of his life thus far against Big Sandy but it was not quite enough Tuesday to lift the Cardinals past the Wildcats in non-district action at Cardinal Gym.

The Wildcats turned it up a notch on defense in the third quarter and outscored the Cardinals 16-6 in the period with Bullock bulling his way inside for seven points in that quarter.

It was hard for Britten to get up shots in the third quarter with the hounding Wildcats defense as Big Sandy held its first lead of the game at 44-43 at the end of the third.

Britten answered with a big three-point missile late in the third to give the Cardinals a 48-46 lead, but the Wildcats went on a 6-3 run, getting three buckets inside from Bullock, to hold on for the win.

Britten had a chance to win it with a three-point attempt with 0:05 left, but it rattled out. The Cardinals then got Big Sandy to turn it over on the ensuing inbounds pass as Britten swiped the ball, missed a short shot and fellow Cardinals player Jerris Brown got the rebound. His putback rattled off the rim, and the Wildcats held on.

Tavian Battise had 11 points and five rebounds for the Wildcats, while teammate Javon Criswell contributed nine points and eight boards.

Fernando Rodriguez had seven points for the Cardinals, while Aaden Bush had five points and five rebounds.

Aaron Torres led the Cardinals with eight rebounds, while Lincoln Breaux had five.

Big Sandy finished with a 28-23 rebounding edge. The Cardinals had 16 turnovers, while the Wildcats had 17.

The Cardinals hurt themselves at the charity stripe, going just 2-of-7 from the free-throw line while Big Sandy was 7-of-8.

The Cardinals led 20-16 at the end of the first quarter as Britten fired in 14 of the points and drained four three-pointers.

The Bobcats (4-1) trailed 52-46 entering the fourth quarter but outscored the Longhorns 17-11 to force overtime before Hamshire-Fannett was able to pull it out.

Pete Ragusa led the Bobcats with 26 points and had six rebounds and four assists.

Zane Wrinkle chimed in with a nice double-double, scoring 16 points while hauling down 10 boards and dishing off five assists.

NEDERLAND – The Little Cypress-Mauriceville Bears dropped a tough 47-41 decision to the Nederland Bulldogs to end their five-game winning streak to start the season.

Luke Harrison had 16 points to lead the Bulldogs while Dallas Rosette added 11.

VIDOR – Getting a huge outing from Zander Lindsey, the Vidor Pirates stormed past the Kountze Lions, 69-58, in non-district hoop action.

Lindsey poured in a whopping 33 points to go along with eight rebounds and three blocked shots.

Kaylee Britten led the Lady Cardinals with 12 points and also led the way in steals.Rylynn Thornton was the top rebounder.