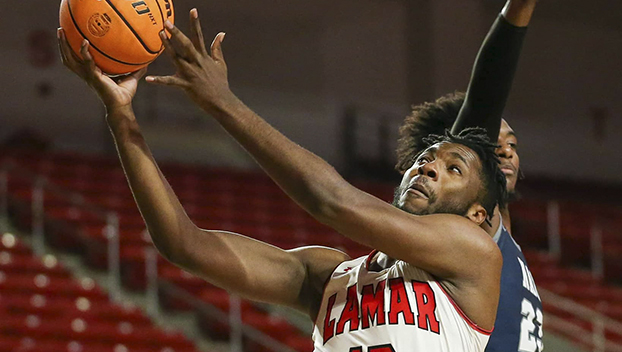 The 6-10 sophomore post scored a career-high 16 points, grabbed seven rebounds and had two blocked shots as the Cardinals fell to Southern Methodist University 75-50 in Dallas.

Lamar coach Alvin Brooks has been looking for a lot out of Catt, heading into his sophomore season.

“Every championship team that I’ve ever been a part of has had great role players,” said Brooks. “In the post, you have to have a guy at the rim who can defend, block shots, rebound and play with some athleticism and energy, and at 6-10, 230, that is what Valentin brings us.

“In this day and age offensively, folks like to run a lot of pick-and-roll, and Valentin can defend that, defend the post and play fast the way we want to. Valentin is a tremendous athlete and brings great energy to court.”

A 2019 All-Region III Class 3A selection at Orangefield, Catt quickly ascended the recruiting rankings. Playing his first year of competitive varsity basketball in 2018-19, Catt became a weapon on both ends of the floor.

A double-double threat as a junior, Catt averaged 15 points and better than 11 rebounds per game. He was also a weapon on the defensive end of the floor, recording 5.1 blocks per game.

During Orangefield’s postseason run, Catt averaged a triple-double per game (15.0 points, 13.3 rebounds and 14.0 blocks per game).

The Bobcats won a school-record 29 games that season, as Catt was named All-Orange Leader Hoops MVP.

SMU jumped out to a quick start from the field (7-of-13) but the Cardinals didn’t let their hosts run and hide trailing by just five, 19-14, midway through the opening half. The Mustangs were able to extend their advantage following an 11-2 run to build a double-digit lead. Catt put a stop to the run with a layup in traffic with less than seven to play but SMU held the double-digit lead for the rest of the half.

SMU utilized its size in the paint to prevent baskets from point-blank range as the hometown team recorded four blocks in the opening 20 minutes – and finished the day with eight.

The Cardinals return to action Thursday when they return home to host Texas State. The game tips off at 7:30 p.m. from the Montagne Center. The later start time is to accommodate fans who also want to participate in the Cardinal Lights. Fans who attend Cardinal Lights receive a voucher for 10 percent off admission to the game.

The contest is also Faculty and Staff Appreciate Night. All LU faculty and staff will receive two free tickets to the game with all additional tickets being 50 percent off. The faculty/staff tickets must be picked up at the downstairs ticket office of the Montagne Center before noon on Dec. 1.