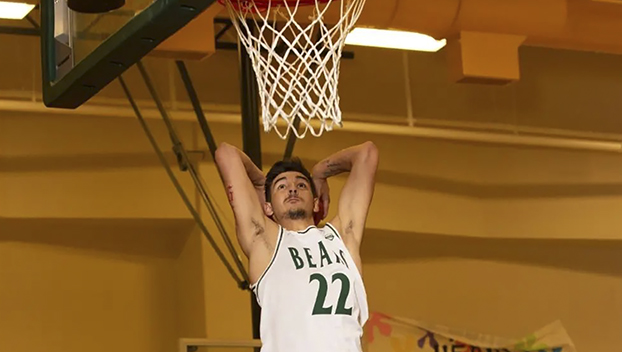 LITTLE CYPRESS — After having one of their best seasons in recent memory, the Little Cypress-Mauriceville Bears boys basketball team is off to a dazzling start in 2022 for long-time head coach Brad Jeffcoat.

The Bears are clicking on all cylinders, flying high to a 5-0 start. LC-M is coming off a 24-12 season in which they made the Class 4A Region III Quarterfinals for the first time in more than two decades.

Led by scoring machines Ben Elliott and Alantheon Winn, Jeffcoat is proud of the way the Bears are performing.

The two standouts picked up where they left off last year.

Elliott, who nabbed All-Orange Leader Team Most Valuable Player honors last year, is back after averaging 22 points and eight rebounds a game a season ago. He is working to become one of the school’s all-time leading scorer before the season closes.

Winn, the Leader Team’s Newcomer of the Year, already raised his numbers from last season in the early going. Winn averaged 15 points and five rebounds as a sophomore.

“Ben and Alantheon, they are definitely big-time scorers,” said Jeffcoat. “They both have had big games already for us, scoring in bunches and getting several double-doubles with their rebounding skills. They are both capable of going for 25 points at any time. When they both hit high numbers in the same game, that’s always awesome. We’re hard to stop when they can do that.”

Senior point guard Da’Marion Morris returns to the court after another huge season on the football field and is a key cog in getting the Bears in gear on offense and defense.

“He can really set Ben and Alantheon up well with his passing ability,” said Jeffcoat. “He can also score and get hot for us. Where he really sets the tone for us the most is on defense. He’s one of the best defenders I’ve ever coached.”

Noah Fuller was a spark last season and is up for the challenge again this year, his senior season.

“Noah can score for us and is always close to double figures,” said Jeffcoat. “He’s capable of doing a lot of things that don’t exactly show up on a stat sheet. He plays really hard.”

A nice surprise early on has been the play of Ty Blackmon. He was a nice scorer on the junior varsity last season before getting moved up late in the year.

“Ty is shooting lights out right now,” said Jeffcoat. “When he gets hot, it makes us so much better and opens things up for Ben and Alantheon. Ty is also a good player on defense, too.”

The Bears have picked up non-district wins over solid foes in Beaumont Kelly, Port Neches-Groves, Huffman, Buna and Kountze.

“We are playing really well, but there are so many things to work on and get better at. That’s what these non-district games are for,” said Jeffcoat. “District is not too far away, so we want to be at the top of our game by then. That’s what these upcoming tournaments are going to be all about, getting better in all phases of the game.”

The Bears are in the Aransas Pass Tournament this Thursday through Saturday. They will also compete in the Hardin-Jefferson Marathon Tournament next week and host their own two-day tournament at the end of December.

“The Aransas Pass Tournament has been such a fun trip for us the last several years,” said Jeffcoat. “We see some good teams and it gives us that little extra time to get away and bond together as a team by staying a couple nights.”

Of course, state power Silsbee is once again the “top dog” in district.

“We have the potential to be really good with the experience we have,” said Jeffcoat. “Last year was great, but this is a new season and we have high expectations. We want to battle for the district title. We want to go further in the playoffs. We want to get better every time we take the court and play harder than who we are facing. If we do that, it will be a tremendous season.”