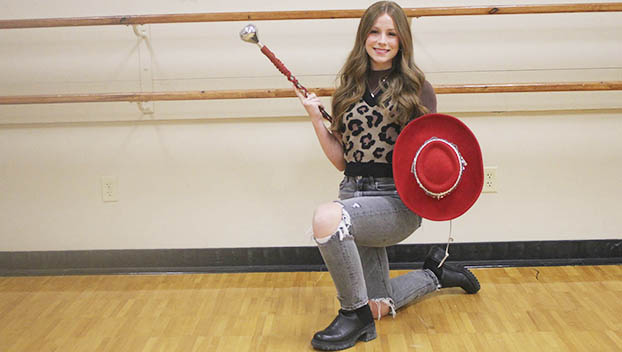 BRIDGE CITY — Those who know Bridge City senior Marlee Mouton know she pushes herself to be the best she can be. She’s been doing that for quite some time.

Mouton, who ranks No. 1 in her senior class, wears many hats on campus.

She’s first lieutenant for the always-amazing Bridge City Strutters Drill Team. She is a senior class representative for Student Council. Of course, she is a member of the National Honor Society.

She also spends plenty of time in Encroix, which is a fellowship of Christian dancers, and is also part of the leadership class for Student Activities Director Cheryl Royal.

Principal Tim Woolley said Mouton is “such a leader,” not only as a great Strutter leader but across the entire campus.

“She is so in-depth in everything she does,” said Woolley. “She comes from a great family, and I know her mom is proud of her. She always carries a sweet disposition and makes everyone around her better. She’s the type of kid you wish you had 100 of because she is so instrumental to our entire campus.”

The hat Mouton likes to wear the most is that of a Strutter.

There is just something special about being part of the Strutters, she said, adding she grew up wanting to be one.

“The tradition of the Strutters is like no other, really around the whole Southeast Texas area,” she said. “We work so hard to accomplish our goals and we all love to entertain everyone.”

A lot goes into being a Strutter. The work and practice to improve is almost a daily process.

Being a first lieutenant is a responsibility Mouton has cherished.

She earned the role as a junior. 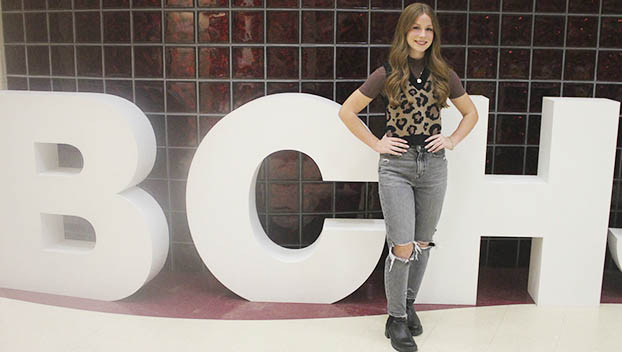 “In that role, it allows me to break off in a group of seven or so and we all get to work together and get the routines down for a week,” said Mouton. “We take turns rotating with our dances. I also help everyone make sure they have all of their uniforms ready, make sure they know when all the practices are and break down the schedule for each practice.”

As an officer, Mouton loves going to camps and enjoys the one in Richardson during the summer that lasts four days.

“You get to connect with other teams across the state,” said Mouton. “You get to develop special bonds, and we all learned about three new dances a day with different styles.”

At the end of July, just before the school season really cranked up, the drill team had a “Strutter Sleepover” at Bridgepoint Church.

“We work so hard over the course of the summer, so that sleepover really is special to us,” said Mouton. “We unwind a little bit and all get to know each other even more. We’re grateful for the church to let us do that.”

The Strutters participate in events throughout the year, including Christmas parades and they have a Spring Revue, but there is just something about those Friday Night Lights and performing in front of the football crowds.

“We’re cheering and doing moves in the stands during the first half, and near the end of the second quarter we make our way down to get in one last practice to make sure we got it,” said Mouton. “When we take that field though, it’s amazing. We always open with our Conquest dance routine, which has always been part of our opening. It still gives me chills. I will admit, there were tears in my eyes during that last performance on Senior Night because I knew that was it.”

Mouton said it is fun to be a part of the exciting things going on around campus and being a part of developing those ideas.

“We organize dress-up day,” she said. “We come up with fun ideas for all of our pep rallies. We help at the Pumpkin Patch to promote Halloween. Being in different groups has really helped me open up more to people. It’s great when you pass others in the school hallway and just smile and wave, because it feels like you almost know everybody.”

Mouton cherishes being a part in the Encroix, which was started by legendary Strutter instructor Cathy Riley, who retired at the end of last year.

“It was such a phenomenal idea Mrs. Riley came up with,” said Mouton. “We get together and dance to some amazing Christian music and spend time reading the Bible and picking our favorite verses. We make Valentine cards and pass them out to everyone at school and hand out Bible verses, too.

“We like to do service projects, too. We’ve helped places like soup kitchens and at nursing homes in the past, but that has been tough since COVID. We do get Valentine cards out to the nursing homes. Hopefully we can go during Valentine’s week next time.”

Mouton is a stickler when it comes to her grades.

Math is her favorite subject because she loves to deal with numbers. She also likes English and enjoys writing essays.

She is inspired by her mother, Tara Mouton, who is a single mother to Mouton and her two sisters since her father Aaron Mouton passed away when she was in sixth grade.

“My Mom is the most amazing woman on the face of the Earth,” said Mouton. “She has been there for us every single step of the way. She has worked so hard to keep food on the table and keeps us dressed and always goes that extra mile. With three girls, she has always found time for each of us. She doesn’t miss a thing. She is always at my performances and makes sure I’m ready and prepared and have all of my stuff together every day.

“I love helping her whenever I can with chores around the house and I make some money cleaning houses at times, like my grandma’s house. She wants to see each one of us prosper in life, and we couldn’t ask for a bigger role model.”

Mouton certainly cherishes the memory of her dad.

“He was so special to me, and I want to continue to make him proud,” said Mouton. “One of my favorite memories was when I was in third grade and we were taking AR (Accelerated Reading) tests. He would pick on me, saying that I was probably somewhere between a third grade and fifth grade reading level. I bet him that I could be at a 12th grade level. Well, I was at a 12th grade level and I think he knew it all along, too.”

Mouton’s plans are to attend either Stephen F. Austin or Texas A&M after graduation.

“I’m kinda torn right now,” said Mouton. “SFA has an amazing Interior Design Program and I love learning about home décor and all the new styles and what it takes in designing a beautiful home. A&M has a great Architectural Program, as well, and I’m interested in that possibly, too.”