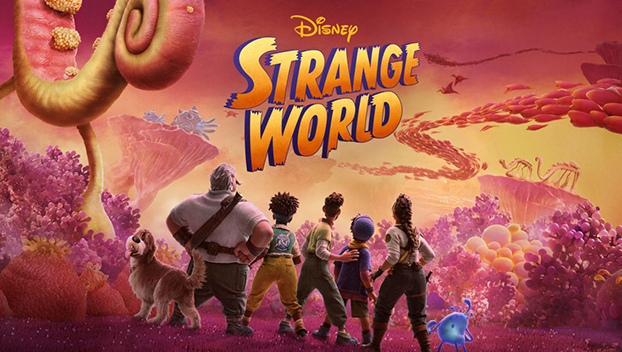 Sometime around the turn of the millennium, executives at Walt Disney decided that while “The Little Mermaid” and “Beauty and the Beast” were great, what they really needed were some adventure movies that would get boys excited.

Which is how we got “Atlantis: The Lost Empire” and “Treasure Planet.”

Remember those films? No?

I bring this up because Disney’s latest animated classic, “Strange World” feels a lot like those boy-centered adventures from twenty years ago. The result is a movie that is heavy on exploring and monster fights, but light on genuine character development and emotional resonance.

In short, the story is definitely strange, but only slightly memorable.

The story begins with a father and son team of adventurers. Jaeger and Searcher Clade are trying to climb the unclimbable mountain that surrounds their community.

Searcher (Jake Gyllenhaal) stumbles upon a mysterious plant that contains a form of energy within its fruit. He wants to take the plant back to town, while Jaeger (Dennis Quaid) wants to continue climbing the mountain.

Right at the top we are given a father and son dynamic that will define this movie.

Both men think that they are doing what’s right and are unwilling to see things from the other’s point of view. Which makes it ironic when the movie flashes forward 25 years and Searcher now has his own son, Ethan (Jaboukie Young-White) who bristles against his father’s point of view.

The story picks back up when the mysterious plant that transformed their world suddenly starts to die off.

Now it’s up to Searcher to follow the plant’s root system in a perilous journey to the center of the planet.

Do I need to even mention that the interior world is a little strange?

What follows is a series of adventure battles against monsters that want to eat the human explorers, a daring trek across the wilderness, a couple of unexpected surprises about the true nature of the strange world, and, of course, a few life lessons learned as fathers and sons learn to trust each other.

All of this works well enough, but none of it really sinks in.

The story is filled with strange plot holes, while the characters seem to change because the screenwriter told them to do so, rather than actually being motivated by the story. The end result is a film that feels more like a throwaway Saturday morning cartoon, rather than a high-profile Disney Thanksgiving Day release.

All of which leaves me scratching my head. “Strange World” is a fun little escapade. The monsters are creatively drawn, and the world building is well thought out.

I certainly enjoyed the adventure, and I suspect that younger boys might also enjoy the journey. But that’s not the same as saying that this is on the same level of Disney’s previous animated films.

Give the film credit for living up to its title, but I fear that “Strange World” will quickly be forgotten, just like “Treasure Planet” and the other Disney marginal misfires from twenty years ago.