VAN WADE — Football campaigns wrap up for Orange County; see who is left from SETX to cheer for 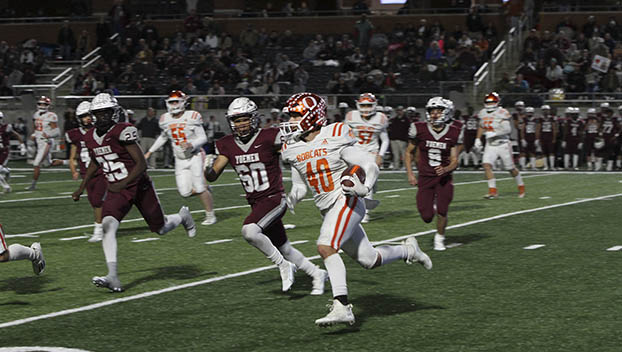 Well, the Orange County football season came to a close on a dreary night in Alvin last Friday as the Orangefield Bobcats bowed out to the Cameron Yoe Yoemen in the Class 3A Region III Division I Area Round of the playoffs.

In usual Orangefield fashion in all of its sports, the Bobcats battled extremely hard for four quarters, despite early mistakes hampering them out of the gate.

Congrats to the Bobcats (9-3) and long-time coach Josh Smalley. This squad will go down as one of the best in school history, including a first outright district title since 1988.

If he isn’t a finalist for the Willie Ray Smith Offensive Player of the Year Award, I would have to use the old phrase, “something is rotten in Denmark.”

Though I have no so-called “dogs left in the fight,” Southeast Texas still has six outstanding football teams in the chase.

What a year it has been for the Indians and first-year head coach Jeff Joseph. The Indians have been on fire of late.

It should be a good one when the Indians (10-2) tangle with the Brenham Cubs (8-4) in NRG Stadium in Houston Friday between two tradition-rich and proud programs. Houston Texans fans should go check these two out. They have not seen many winning efforts this year.

I’m super happy for Memorial coach Brian Morgan and the Titans. Not only have they written off those first round losing blues, they find themselves in the third round after a thrilling overtime win last week.

Coach Morgan and staff need to dig into their bag of tricks this week as the Titans (11-1) mix it up with the state’s No. 1-ranked Class 5A Division I squad in Longview (12-0).

Longview has been motoring through its schedule all season. Former Little Cypress-Mauriceville standout and former Bears coach Josh Rankin is a proud member of the Longview coaching staff.

What a year it has been for Hardin County with the Lumberton Raiders and Silsbee Tigers representing in the third round.

The Raiders (11-1) have their toughest test yet this week when they face the Tyler Chapel Hill Bulldogs (10-2). It was Chapel Hill that knocked off Vidor in bidistrict and LC-M in the regional finals last season.

Good Luck to former Bridge City head coach and assistant coach Allen DeShazo, who is on the Lumberton staff and is the track coach.

The undefeated Silsbee Tigers (12-0) continue to steamroll their way through what I considered a weak Class 4A Region III Division II. The Tigers could be poised to make it all the way to AT&T Stadium in Dallas if they continue to take care of business.

They will take on a Madisonville (8-4) team this week that managed a 9-3 victory over previously undefeated Bellville.

Hamshire-Fannett continues its magical journey after the Longhorns (9-3) held off Waco Connally last week in 4A Region III Division II. There is a tall task ahead of this week against the always-powerful Cuero Gobblers (11-1).

Last, but certainly not least, are those Newton Eagles (11-1) in Class 3A Division II. The Eagles have been obliterating opponents at a rapid pace and look to punch their regional final ticket this week when they face Daingerfield (10-2).

A big shout out goes to former West Orange-Stark offensive coach Terry Joe Ramsey, as he is an assistant with the Eagles following his departure from WO-S after the last school year ended.

Here is hoping Terry Joe snags another ring because he’s always been a gem.

It’s always bittersweet this time of year as football season closes. I’m going to miss the weekly visits with the coaches, the big-time plays that players make, the sounds of the bands, the yells of the cheerleaders and the smooth dancing skills of the drill teams.

Congrats to all of the students, coaches and parents who made the Friday Night Lights special again.

Now it is time to see who has the best three-point shot, dunking style and basketball tournament hospitality rooms.