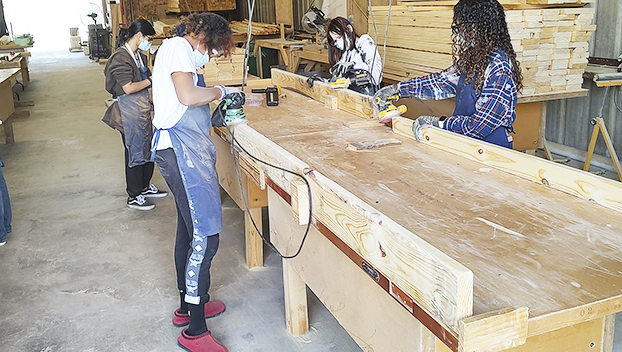 Students from the Family and Community Service Class are pictured volunteering for Sleep in Heavenly Peace in November. (Courtesy photo)

An organization aimed at providing free beds to children without is calling for additional volunteers as they prepare to reach 2,000 deliveries by the end of the week.

Sleep in Heavenly Peace, whose local branch is based in Beaumont, serves Jefferson, Orange and Hardin counties.

“The mission of Sleep in Heavenly Peace is that no kid sleeps on the floor in our town,” said representative Jack Seeley.

“It was a grandmother who was blessed or burdened, depending on your point of view, who was taking care of grandchildren,” he said. “I believe there were five kids, but they were moving around so fast…”

Beds are constructed by volunteers in a warehouse near Baptist Hospitals of Southeast Texas and delivered assembled and dressed.

“Everything is done locally,” Seeley said. “We have to raise our own funds. We have to raise $250 for each bed — that includes the frame, the mattress and the bed clothes. The only support we get from an outside source is Lowe’s. (They) have been a tremendous supporter. They donated $1 million in 2021 and $1.5 million in 2022. Unfortunately, I didn’t get all of it but I did get a small portion to help.”

Some funds are collected through fundraisers at schools such those in the Little Cypress-Mauriceville Consolidated Independent School District, where students are allowed to pay $1 to wear pajamas to school on certain days.

Sleep in Heavenly Peace, according to information from the national organization, began in a garage near Christmas in 2012. Within six years the nonprofit was in 44 states with more than 250 chapters.

Volunteers both build and deliver beds, which are constructed in a manner where they can be used as bunk beds.

Beds are built on the second Saturday of each month and delivered the following Saturday.

And they’re hoping to get at least 100 more beds delivered to families by Christmas.

Seeley said up to 3 percent of children 17 and younger do not have a bed of their own — defined as children sleeping with siblings or relatives, on couches or in chairs, or on the floor.

Seeley said in order to apply, residents can visit SHPbeds.org and fill out the application, which will then send local applications to the Beaumont site.