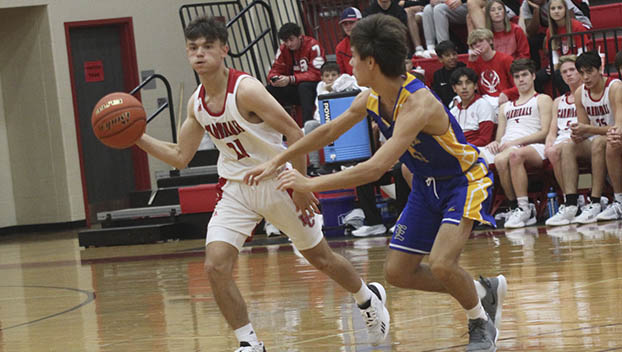 BRIDGE CITY – After controlling the game for over three quarters and watching Evadale bounce back to trim it to a one-point game, the Bridge City Cardinals turned to senior “sniper” Walker Brittain to turn back the Rebels.

Brittain fired in a game-high 21 points and buried four three-point bombs in the fourth quarter, leading the Cardinals to a 65- 52 win over Evadale.

Evadale (0-1) trailed the Cardinals (2-1) almost the entire game but was able to trim it to 52-51 with a little more than five minutes remaining. That is when Brittain got the hot hand, burying three three-pointers in a row and sparking a 13-1 spurt.

“When Walker gets hot, he makes everyone hot,” said Cardinal coach Randall Robertson. “He definitely sets the tone for us. When he gets going, it opens up so many things for us, especially on the inside. Aiden Guitierrez had another excellent game. He’s a workhorse out there and does so many things for us.”

Guitierrez filtered in 16 points for the Cardinal offense and Jagger Carlin had nine points. Guitierrez and Carlin were stout on defense as the Rebels had trouble throughout controlling the ball.

Evadale finished with a whopping 34 turnovers.

“Defensively, we played really well, we didn’t press a lot but we really hustled inside the paint to force the turnovers, which was a good thing because they really hurt us on the boards.”

The Rebels outrebounded the Cardinals 41-20.

Jaden Grvis had a double-double for Evadale, notching 17 points to go along with 12 rebounds.

Fernando Rodriguez had eight points for the Cardinals and buried two three-pointers while Aaron Torres yanked down a team-high seven rebounds.

The Rebels finished 13-of-20 from the free-throw line while the Cardinals went just 14-of-27. Bridge City finished with 17 turnovers.

LITTLE CYPRESS – In their first home game of the season, the Little Cypress-Mauriceville Bears scooted past the Huffman Falcons 56-45 at The Grove.

Ben Elliott and Alantheon Winn each had double-doubles for the Bears. Elliott filtered in 24 points and snagged 11 rebounds. Winn contributed 11 points and 10 boards while Da’Marion Morris tallied eight points.

VIDOR – The Vidor Pirates claimed a 68-56 victory over the Huntington Red Devils in non-district hoop action.

NEDERLAND – The Bridge City Lady Cardinals went 5-1 in the Nederland Tournament, including a 36-33 win over Port Neches-Groves Lady Indians.

Morgan Louvier had 13 points in the victory over PN-G while Rylynn Thornton had a double-double with 10 points and 10 rebounds.