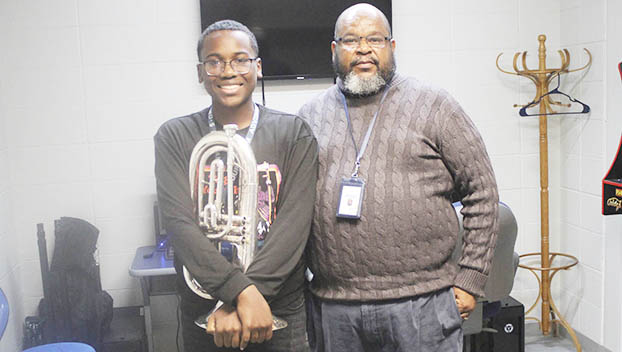 Sophomore Johnathan Stewart has become a proud member of the WO-S M3 Marching Band and has enjoyed the guidance of Band Director Tommy Gladney, who took time to take a photo with his pupil and his baritone. (Van Wade/Orange Leader)

WEST ORANGE — Even though he is a sophomore, it almost feels like Johnathan Stewart has a senior-like vibe on the West Orange-Stark High School campus.

He likes to be part of the limelight as a member of the M3 Marching Band and loves putting other students in the spotlight with his journalism skills.

“I just like to bring out the positive in everything that I do,” said Stewart. “High school is not only learning but having fun and building special bonds.”

Stewart is just in his second full year of band and plays the baritone.

“I wasn’t too sure about being in band at first but our junior high band director told me how much fun it can really be. I did it and fell in love with it,” said Stewart. “I just like the sound of the baritone and the bass in it. It’s one instrument that can certainly stand out when playing it.”

Stewart also stressed how much hard work the Mustang Band puts forth for Band Director Tommy Gladney. A lot of people don’t realize how much sweat and grit and precision it takes.

“About three weeks before school starts, we’re literally up here on campus from 7 a.m.-5 p.m.,” said Stewart. “We get here and get ready and then we hit the field, working on our marching from about 8 a.m.-noon. We take a lunch break and then we stay in the band hall working on our music to late in the evening. So much goes into it. It can be a grind, but it’s a blast.”

Stewart really likes how Gladney pushes band students to be the best they can be.

Gladney is an inspiration to Stewart.

“He constantly works with all of us to help make us do better,” Stewart said. “He’s so precise, especially when it comes to marching. He makes sure we hit each step and hit every yard line.”

Gladney likes how astute Stewart is in learning.

“Jonathan came in here with basically no band experience coming into high school and now he really shines,” said Gladney. “He’s very attentive and is constantly asking for advice on how to improve. He’s also great around all of the band kids. He’s the type of kid you just love having in your program because he gives it a boost.”

Stewart has enjoyed the boost that the band has had in recent years.

“We’re continuing to grow, and that’s so awesome,” said Stewart. “Last year I believe we had about 48 in the band and now I think it’s 64 or a little more. “

Stewart likes all of the music that the band plays but he has two favorites.

“I really enjoy when we play ‘Out on a Limb’ by Teena Marie and then one I really love is ‘Sweet Dreams/Beautiful Nightmare’ by Beyoncé,” said Stewart. “I also love performing under those Friday Night Lights. We love to get the crowd riled up and off their seats. What’s even greater is when we march on our home field and those bright lights are shining on us. It just makes you tingle inside.”

Stewart feels band members are a tight-knit group with all the time spent together.

“One of the best times is when we went to Oklahoma and stayed in a hotel and we got to play at a Langston College football game,” he said. “It’s things like that that gives everyone a chance to know everyone even better. Things like that helps a bond grow. We also march and play at the Galveston Mardi Gras, which is awesome.” 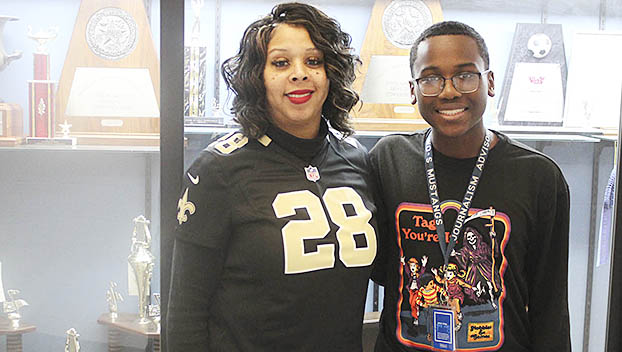 Sophomore Johnathan Stewart loves taking photos from his journalism class but also loves being in photos as well. Here he is with high school principal secretary Crystole Collins, who is also his cousin. (Van Wade/Orange Leader)

“I just love shooting all kind of events, especially sporting events,” said Stewart. “I try my best to learn all of the angles, where it is best to stand and look for the best quality shots possible.”

Stewart is proud to say he learned from one of the best his freshman year in long-time journalism teacher Meri Ellen Jacobs, who retired after the last school year.

“Mrs. Jacobs, she loves watching her students flourish and would always give that extra time to us to teach us so many different styles of shooting pictures,” said Stewart. “People will look at some of my pictures and say things like ‘those are really great.’ So much of that is due to her, and she’s the reason I fell in love with photography.”

Stewart is also a key cog in helping maintain the school website.

“I’m able to download a lot of photos from the journalism staff and put them up on our site to make it sparkle,” said Stewart. “It’s not all sports shots either. It’s about all of the happenings around campus. We have a lot of fun with it, and I’m so happy the school lets us put our work up there.”

Stewart does his best to keep his grades sparkling.

“I’m the type of person that gets Bs sometimes and that frustrates me. I work hard to improve on that,” said Stewart. “My parents, Lyza Jackson and Johnathan Stewart, really stress grades to me and so does my grandfather, Earl Thomas. He’s been such a big influence to me for so long. I really look up to my family a lot.”

One family member certainly has high praise for Stewart.

“I may sound partial, but you couldn’t ask for a better kid that just enjoys being a student and loves working on his crafts, whether it is band or journalism,” said Collins. “He has those instincts in him that can just brighten up anyone’s day. He’s so outgoing and such a religious young man that loves his church family, too. His grades are good, and he’s usually on the Superintendent’s or President’s list as far as that goes. He’s so super positive and we are all super proud of him.”