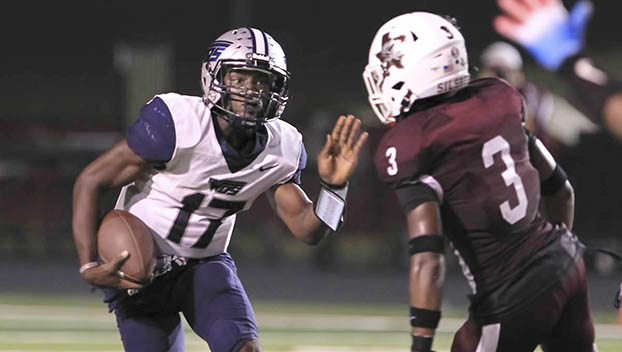 WO-S sophomore quarterback Marcus Turner, Jr. (17) looks to elude a Silsbee defender during district play. Turner, Jr. made excellent strides throughout the season and will be ready to guide the Mustang offense again next season. (Mark Pachuca/Orange Leader)

WEST ORANGE – It may not have been the season the West Orange-Stark Mustangs were aiming for, but plenty of young players saw a slew of playing time for first-year head coach Hiawatha Hickman.

The WO-S staff is anxious to progress into the future.

“We had our opportunities for sure,” said Hickman. “After looking at the film, we saw so many chances that we could have had. It was all about execution and finishing the plays out. That is what has hurt us a lot this season.”

One thing Hickman saw was how hard the Mustangs competed.

“The kids never backed down and they were in it to win it,” said Hickman. “Bellville got a couple of those long sustained drives that they are accustomed to doing. We got behind early, but the kids rose up so well to get themselves back in the game. I was really proud of them.”

It has definitely been a transitional season for the Mustangs. Hickman was part of the staff of some excellent Mustangs teams before he accepted the head job in February.

He brought in a lot of new faces to the staff, and that always takes time for players to adjust.

“We knew there were going to be some getting use to by the players and the new coaches,” said Hickman. “A lot of the coaches were at other schools until the end of the last school year and couldn’t be here full time until the summer months. A new head coach and new offensive and defensive coordinators, that’s a lot for kids to adjust to. We were all trying to learn each other and grow together.”

Hickman wants to see that growing process continue into the offseason.

“We’re excited about what we can get done in the offseason,” said Hickman. “Kids here, they know how to work, and they know how to get better. As a staff, we also realize we’ve got to do things better, too. I totally understand, going 5-6 at West Orange-Stark is just not acceptable. Our plan is to change that and get back to where the Mustangs belong.”

The Mustangs fought through some players that left the squad and they had to battle through some tough injuries.

“We went into our first district game with Silsbee, missing four starters that started the season for us,” said Hickman. “One of our best players in Jamal Shaw missed so much time this season due to a nagging injury. It was tough at times but we had some young kids really step in and performed for us.”

Hickman is thrilled about how the sophomore class stood out.

“I was looking at us on the field when we played Bellville and we had 10 sophomores out there, not at the same time, but they were all contributing,” said Hickman. “I may be wrong, but I bet West Orange-Stark has never had that many sophomores getting that much playing time over the years.”

Hickman is definitely proud of the way sophomore quarterback Marcus Turner Jr. made strides throughout the campaign.

“When district started, almost every team in our district had a starting quarterback that started last year,” said Hickman. “Marcus held his own and you could just see the improvements he was making each week, in practice and in games. He had moments where he proved himself with his arms and his legs. It’s great to know we’ll have him back running the offense again next year. We have some good backs returning. Our offensive line will be back except one. There is a lot to build off of.”

The Mustangs have another grueling non-district schedule again next year and another tough District 9-4A Division II to try and motor through.

“We’re always going to play a tough schedule. That’s just what we do here,” said Hickman. “Five of the six teams we fell to this year are still playing this week, and that says a lot. We’re going to work hard and bust our tails throughout offseason and the summer to compete better against those guys next year.”