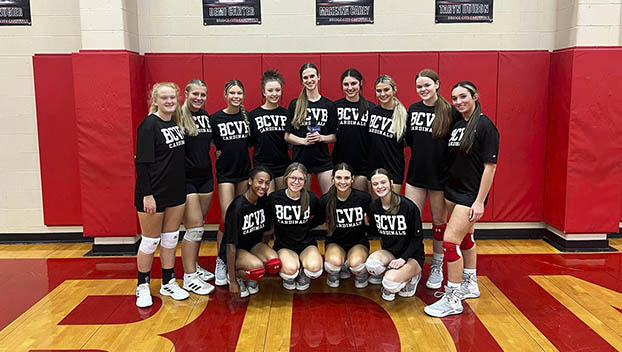 The Bridge City Lady Cardinals recently wrapped up another tremendous season which saw them go undefeated in district play for the second straight year and advanced to the third round of the playoffs. (Photo courtesy Bridge City Volleyball)

BRIDGE CITY – Another superb high school volleyball season recently ended for Bridge City, and as usual, they will get to hang another banner at Cardinal Gym.

The Lady Cardinals certainly had a tremendous run, capturing the district title for the third year in a row.

What makes it even more special – how about back-to-back perfect 12-0 district marks.

‘To see how far they have come and to do what they did this season was truly amazing,” said DeLuna. “We were a work in progress in the early going, especially after losing some outstanding seniors from last year. We have some young kiddos that can flat-out play.”

It is amazing still to think what the roster looked like during their playoff run.

“We had five freshmen, four sophomores, three juniors and one senior after we called a few of the younger ones up for the playoffs,” said DeLuna. “We went undefeated in district with that young of a team. It just makes you think how good we could possibly be next year.”

The Lady Cardinals will definitely miss their one senior though. Taryn Doiron has left an everlasting mark on the program as a setter. Doiron piled up a stunning 535 assists to go along with 241 kills, 258 digs and 102 aces.

“Taryn has been so phenomenal for us, she has really led the way and has set the tone for us the last couple years,” said DeLuna. “Not only is she one of the best players in Southeast Texas, she is the best team leader you could ever ask for.”

DeLuna is elated to have junior hitter Demi Carter back. Carter, who was recently named the Most Valuable Player on the All-District 19-4A Team. All Carter accomplished this season was 453 kills, 193 digs, 89 aces and 70 blocks.

“It’s great to have Demi back in the mix, and she is such a force,” said DeLuna. “She became a nice leader for us this year and we know she will be as a senior.”

Junior defensive standout Lexi Nugier will be back next season, along with sophomore Chloe Doyle. Nugier set the tone defensively with 303 digs and had 58 aces while Doyle had 54 kills and 31 blocks.

Three freshmen played huge for the Lady Cardinals and will be ready to amp up their games even more as sophomores. That includes Anna Kelly, Makenna Knight and Cambree LaComb.

Kelly, despite her youth, proved she could be dominant at the net. She finished with 248 kills, 218 digs and 95 aces. Knight will be ready to be more assertive at the net after registering 114 kills, 122 digs and 56 aces. LaComb, meanwhile had 398 assists to go along with 130 digs and 38 aces.

“Anna Kelly, with her work ethic and still room to grow, could possibly be one of the most dominant players to ever play here and that is saying a lot,” said DeLuna. “She has a nice complete game and so does Makenna (Knight).”

DeLuna really likes what LaComb can bring, as well.

“Cambree learned so much this year with Taryn, and was a nice protégé, learning how to set her teammates up from one of the best to ever do it,” said DeLuna. “We feel confident that Cambree can step into that top setter role and help get us rolling.”

One thing is still lasting in DeLuna’s gut though, the tough loss to Huffman in the Regional Quarterfinals 23-25, 25-21, 25-17, 25-16. It marks the third straight season the Lady Cardinals have fallen to the Lady Falcons in the same round.

There is some positives though, Huffman went on to win Class 4A Region III and is at the State Tournament this week.

“That match was so tough for us, we came out and just didn’t play at our best,” said DeLuna. “Maybe it had to do with us being so young and in that kind of atmosphere. Now the kids know what it is like and will be ready to kill it next year. We’re looking for a great season again next year. With this bunch, I know we have the talent to accomplish it.”