HOOP ROUNDUP: Short-handed Bobcats fend off Vidor; rest of county gets in on the action 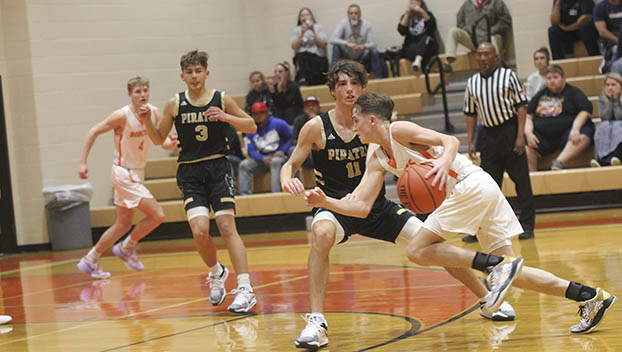 ORANGEFIELD – Getting ready to enjoy their move back down to the Class 3A basketball ranks, the Orangefield Bobcats are off to a good start for long-time basketball coach Jake McDonald.

The Bobcats picked up a season-opening win over Onalaska 73-59 and held off the Vidor Pirates 59-50 at Bobcat Gym.

McDonald is relying on returning standouts Pete Ragusa and Zane Wrinkle to carry the torch and several younger players that are contributing early on.

“Pete and Zane are definitely our leaders and they are getting our young guys involved,” said McDonald. “We’re getting some kids in that are gaining varsity experience earlier than expected. Zane had nearly a triple-double against Onalask. Pete is really back and is a force again for us after battling a health issue late last season. It’s awesome to have him back at 100 percent.”

The Bobcats and Pirates battled hard in their non-district matchup.

The Bobcats built up their lead to as much as 37-23 at one point before the Pirates, who were playing their first game of the year, got hot and as close as 55-50 in the waning minute.

Ragusa led the Bobcats with 26 points, five assists and four rebounds, scoring 16 of his points in the second half.

The future looks bright for freshman Jaden Scales, who scored 15 points in the season-opening win against Onalaska. He chimed in with 17 points and hit three three-pointers in the fourth quarter against Vidor.

Guard Bryce Loftin helped lead a furious Vidor comeback. He led the Pirates with 21 points and had eight rebounds. He had 11 points in the fourth quarter, including three three-point bombs.

Brayden Root had 12 points and nine rebounds for the Pirates, while Zander Lindsey added eight points and seven boards.

PORT NECHES – The Little Cypress-Mauriceville Bears improved to 2-0 on the young hoop season with a 59-45 road victory over the Port Neches-Groves Indians.

The Bears received double-doubles from Alantheon Winn and Ben Elliott in the victory. Winn powered his way to 19 points and 12 rebounds while Elliott had 17 points and 10 boards. Ty Blackmon filtered in 12 points for the Bears.

Eddie Gaspard had 13 points for the Indians while Chris Clark had 10.