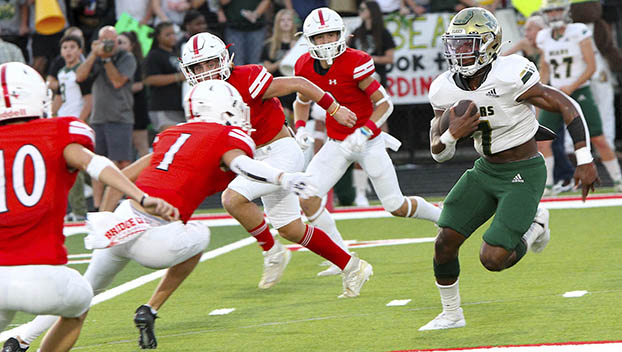 LITTLE CYPRESS – It was a whirlwind football season for the Little Cypress-Mauriceville Battlin’ Bears.

When all the dust settles, the senior class will remember what was a solid campaign.

The seniors became a part of the first team to post back-to-back winning seasons since 1994-95 and made the postseason the last two years for head coach Eric Peevey.

LC-M wrapped up the season 6-5 overall, earned the third-place playoff seed out of District 10-4A Division I. The Bears fell to Kilgore 28-6 in the Class 4A Region III Division I bidistrict playoffs last week.

“This season had so many things take place, but the kids responded and gave it their all,” said Peevey. “We’re certainly going to miss this senior class. They were part of something special, making the Regional Finals last year and making the playoffs again this year.”

Peevey likes the ground work the senior class has set.

“They came in as juniors and bought in to what we were wanting to do and they were here every step of the way,” said Peevey. “We’re going to miss a Da’Marion Morris. We’re talking about a kid that has collected nearly 5,000 yards of total offense. Amier Washington and Javes Riley, just think how big they were anchoring the defensive line for us. Those guys and all of the seniors, they’re leaving such a positive mark.”

The Bears certainly battled some adversity throughout the season. From their turf field not being done prior to the season starting, to some nagging injuries late that enabled some of the younger players to gain experience.

That type of schedule can be weary on any team at any level.

“I think it really drained on the kids after awhile but that still didn’t keep them from getting after it,” said Peevey. “One thing we learned this year is that we do need to learn how to play better on the road. Another good thing though, six of our games are at home next year.”

Peevey and his staff had an influx of young talent, including a slew of sophomores who mixed in and played well at the varsity level.

“The later the season got, the more we called up to help us out,” said Peevey. “They really responded well. Now it’s all about building on that time they got and get a little bigger and stronger.”

Another thing the Bears football program can hang its hat on is the accomplishments of the two sub-varsity teams.

“We’re so proud of both those groups and what they accomplished,” said Peevey. “To win both of those district championships with as much shuffling as we did, was really special. We moved several kids from the JV up to the varsity and the JV kept rolling. We moved several from the freshmen level up to the JV, and the 9th grade kids kept rolling too.”

Peevey likes what he sees.

“What we do is put a lot of stock in our sub-varsity programs, and the varsity staff coaches both of those teams too, which a lot of schools don’t do these days,” said Peevey. “It gives us a great look at all of the kids at every level. We get to see what they can do and gives them a chance to know all of us as a staff. The future looks really bright here at LC-M. Now it’s just a matter of them getting up here, working out and looking to get stronger. Most of them know the system very well. Now it’s all about translating those Thursday night victories into Friday ones.”