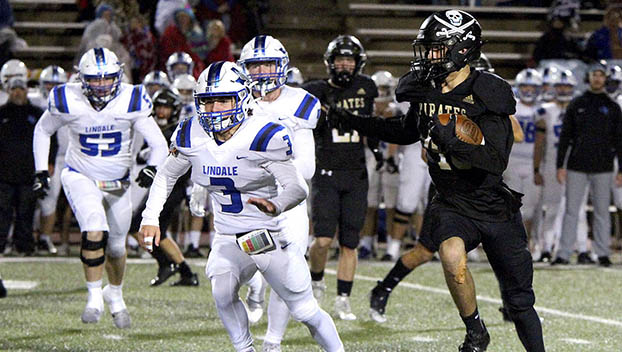 VIDOR — It was a season of peaks and valleys for the Vidor football program, but one that was pretty successful after all was said and done.

However, the Pirates kept plugging away and never gave up the ship, winning six of their last seven regular season games, including going 4-1 in District 10-4A Division I play, to nail down the district’s second-place playoff seed.

However, the miscues that hurt them early in the season reared their ugly head in the Class 4A Region III Division I bidistrict round of the playoffs in which Vidor fell to the Lindale Eagles 45-23.

“It was a tough way to go out but one thing, the kids battled all the way to the final whistle,” said Mathews. “They (Lindale) were just so dang huge up front along the offensive line, and we are smaller and much younger on the defensive line. They came out and ran the ball well, despite coming in with nice passing numbers. They jumped on us early after we had a tough turnover and they got an onside kick. We found ourselves down 21-0, but the kids kept getting after it.”

Mathews certainly enjoyed the season with the Pirates. The 2022 group was special, becoming the first senior class to be a part of three straight playoff teams.

“I’m so proud of this senior class, they really helped put us on the map at the 4A level, earning that No. 1 seed and a co-district championship last season and then getting off the mat to have a strong push again this season,” said Mathews. “We were such a better team then when the season started.”

Mathews and the staff never had any doubts that the Pirates could bounce back from their tough 0-3 start.

“That was tough to go through for all of us and it could have slowed the kids down,” said Mathews. “But what did they do? They came out to practice every day, worked so hard to correct the mistakes we were making, and turned it into something positive.”

Mathews call it having something that is special.

“Around here, we call it Pirate Pride,” said Mathews. “We might not be the fastest or the the biggest compared to other teams, but you always have to factor in heart and work ethic. That is what has made these kids so special around here for years.”

Mathews has led the Pirates to eight of their 10 all-time playoff appearances.

“I’ve been blessed to be a part of so many special teams here,” said Mathews. “The kids here are so wonderful and coachable. Coaching can be tough at times, but with these kids, they make it fun most of the time.”

Mathews feels that Pirates fans have plenty of things to look forward to next season.

“What a lot of people in the area don’t realize is that we played nine to 10 sophomores most of the season,” said Mathews. “The experience they got is so valuable. We’re looking at about 15 starters returning and some more that got a lot of playing time.”

So what is the main thing the Pirates will be doing as the offseason cranks up?

“We were such a young team last season, which means we were smaller than most of the people we played,” said Mathews. “We’ve got to get bigger as far as weight and size and we also have to build some muscle, especially with this big group of sophomores that will be juniors. We’ve got to get them more away from yogurt and salads and have them eat more streak and potatoes.”

Mathews had plenty to say about the Pirates’ season and finished off with this.

“You know, you want to win every game as a coach and as a player, but then you realize that 99.9 percent of us don’t do that,” said Mathews. “Sometimes losses can turn into learns. It’s those moments that they will cherish for the rest of their lives that makes this game so special and the bonds they create forever.”