VAN WADE — Solid seasons end for some; time for all to support Bobcats Nation 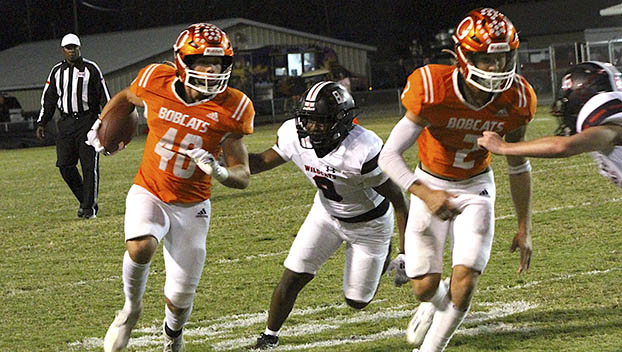 Three teams bowed out, but the Orangefield Fighting Bobcats are moving on as the second week of the University Interscholastic League football playoffs moves full steam ahead.

First of all, congrats go out to the West Orange-Stark Mustangs, Little Cypress-Mauriceville Battlin’ Bears and the Vidor Pirates for battling hard last week and working hard to just make it to the postseason.

Many people thought the Mustangs would melt in a battle with a powerful Bellville Brahmas unit in Splendora. Bellville came in undefeated and left unscathed, but the Brahmas will remember the Mustangs’ grit.

Bellville held on 27-20, but the Mustangs were in it all the way to the final drive as they continuously scrapped.

WO-S coach Hiawatha Hickman had a slew of underclassmen going after an experienced Bellville squad. Sure, it was the first time Bellville defeated WO-S in five playoff tries. You would have thought the Brahmas had just won the Super Bowl after the game, deservedly so I guess, after the past history.

The Mustangs went through their first losing season since 1983, finishing 5-6, but looking at the young talent they had on the field Friday night, the cupboard is far from bare and they could be primed for a nice run next season.

The Bears took on a formidable Kilgore team in Lufkin and were in a tight one with the Bulldogs at the half in a dreary and rainy night in Lufkin. The Bears trailed just 7-6 at the half against the 9-4A power Bulldogs before Kilgore pulled away to win 28-6.

LC-M was sporting a bunch of sophomores who contributed mightily this season, and the Bears had their first back-to-back winning seasons since 1994-95. Success continues to brew in Bear Country because more talent is ready to make its mark at the varsity level. LC-M won district titles at the junior varsity and freshmen levels.

And how about those Vidor Pirates and long-time head coach Jeff Mathews. Many had the Pirates bailing water out of their ship after they dropped their first three games. All they went on to do was win six of their next seven games to earn the second-place playoff seed out of the district.

The Pirates bowed out to another 9-4A power in the form of the Lindale Eagles, 45-23. Unfortunately, what haunted the Pirates early in the season – turnovers – reared their ugly head again in the bidistrict battle. The Pirates got behind 21-0 after the miscues, but in typical Pirates fashion, never gave up, putting up a fight to the very end.

And of course, to the victor goes the spoils.

Congrats to the Orangefield Bobcats and coach Josh Smalley and staff for handling the Shepherd Pirates 55-12 in the 3A Division I bidistrict round.

The Bobcats were up 21-0 before the Pirates could even catch a breath.

Orangefield churned out 481 total yards with their Slot-T offense.

The Bobcats (9-2) captured their first outright district title since 1988 and against Shepherd claimed their first playoff win since 2015 after falling in the first round in their five previous tries since then.

Orangefield will now face a foe in Cameron Yoe (8-3) who carries an amazing tradition and has a huge backing.

The two will meet in the 3A Region III Division I Area Round Friday at 7 p.m. at Alvin’s Freedom Field.

This is where I encourage all of the Bears, Pirates, Mustangs and Bridge City Cardinals fans to back the boys in Orange and White.

Over the years I’ve seen so many football fans from all of our schools, after their teams wrapped up, go and support the team we have left.

I remember seeing a sea of fans that I always see wearing orange, green, black and red, support the Mustangs when they were going to State or going four rounds deep for 10 out of the last 12 years.

After all, who wouldn’t want to see Bobcats back Cameron Dischler run over and past opposing defenders or Gavin Perry-Koci utilize his speed to cruise past opposing secondaries.

Trust me, I’ve seen it. It is something to watch, even more when you see it live.