Orangefield defensive back Jackson Humplik brings it on every down 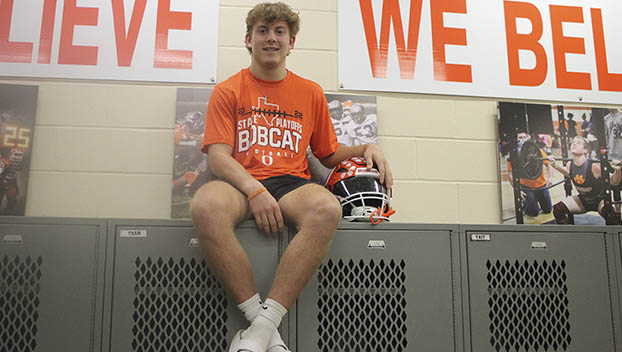 ORANGEFIELD – He may not have the biggest frame or an intimidating attitude, but opponents across Orangefield’s schedule has faced the wrath of Bobcats defensive back Jackson Humplik.

The senior has been a stalwart on the defensive side of the ball all season, playing a key role in leading the Bobcats (9-2) to their first outright district title since 1988 and a victory in the first round of the playoffs over Shepherd 55-12.

“It has been so much fun, having the success we’ve had this year,” said Humplik. “We remember sweating it out during those steamy summer practices, with our goal of winning the district championship. It took a lot of hard work and commitment from everyone, and we got the job done. Winning the first playoff game was great, but now we want more.”

Humplik and the Bobcats will look for “more” when they tangle with the Cameron Yoe Yoemen in the Class 3A Region III Division I Area Round of the playoffs Friday at 7 p.m. at Alvin’s Freedom Stadium.

Humplik has been involved in so many big plays for the Bobcats. He had a crucial interception against Buna in a district-opening win to give Orangefield the momentum that set the tone the rest of the game. It was his scoop-and-score from 40 yards out that had the Bobcats riding high in their district-clinching road win at East Chambers, which was a 28-21 Orangefield victory.

“The Buna interception, I loved that, but the one I’ll never forget was the scoop-and-score against East Chambers,” expressed Humplik. “It just gave us such a lift. To see all of my teammates celebrate after it happened, that was priceless. Plus, it was my first-ever varsity touchdown.”

“That touchdown against East Chambers will go down as one of, if not, the most important play of the season so far,” said Smalley. “Jackson always has the knack of being around the football. He made a great strip of the receiver and he was off to the races.”

“He lines up and starts at cornerback, and we move him to safety at times. He makes so many tackles, coming up to the line of scrimmage,” said Smalley. “He may be small in stature, but he can flat-out hit you. He’s such a good tackler, and nothing hardly ever gets past him. Once he has you, he has you. Heck, he could probably even play some outside linebacker if he had to.”

Humplik will do whatever it takes to make sure the defense is a well-oiled unit.

“I’m not afraid to mix it up with whoever I’m facing and I can be physical when I have to be,” said Humplik. “Making tackles is all about form and how you execute them. Our coaching staff has always done a great job teaching us technique. Being in the secondary, I still love coming up to stop the run. As a secondary, we take a lot of pride in that.”

Humplik played well against Class 4A competition before the Bobcats shifted down to the 3A level this year.

“Some of those 4A guys were big, but they are just as big in 3A too, with 4A just having more numbers and they had more guys playing and getting rest,” said Humplik. “It’s still the game of football, no matter level or class it is. The big difference this year is that instead of chasing the bigger teams, we were the biggest team in our district. Everyone was trying to beat us. We played through it, one week at a time and accomplished getting that district title.”

Humplik is the younger brother of former Orangefield Lady Bobcats softball standout Emma Humplik, who was the 2021 Orange Leader Female Athlete of the Year, who now plays for South Florida. The Lady Bulls have been a powerhouse in NCAA Softball for years.

“I couldn’t ask for a better bigger sister,” said Humplik. “I saw how hard she worked at everything she has tried and I really look up to her. I know she will be rooting hard for me and the Bobcats this Friday.”

There is one dilemma in the Humplik family. Jackson’s father Mark Humplik, a long-time coach in Southeast Texas currently coaching at Hardin-Jefferson, is a graduate of Cmaeron Yoe High School.

Cameron Yoe is known for having such a tremendous tradition, including three straight state crowns from 2012-2014.

“My Dad is kinda eating this up, but he will be sitting on the Bobcats side wearing a Bobcats T-shirt,” said Humplik. “He’s 100 percent behind the Bobcats. But growing up, I went to several Cameron Yoe games, including a game at State and I totally understand why he’s so proud of the school he went to. Who wouldn’t be? I know I will always feel the same about Orangefield. I’m sure we will be talking about this game for a long time.”

“We’ve seen them on film and they are so explosive, just like they always have been,” said Humplik. “They have a lot of good athletes. Hopefully we’ll have a good game plan to help bottle them up a little bit.”

Humplik has enjoyed the spirit of the Bobcats faithful throughout their run.

“To see all of that Orange in the stands, they gets us all so fired up,” said Humplik. “The support we have here at Orangefield is unique, compared to other places. We’re all so tight-knit, and everyone is so supportive around here. There is nothing quite like small-town football.”