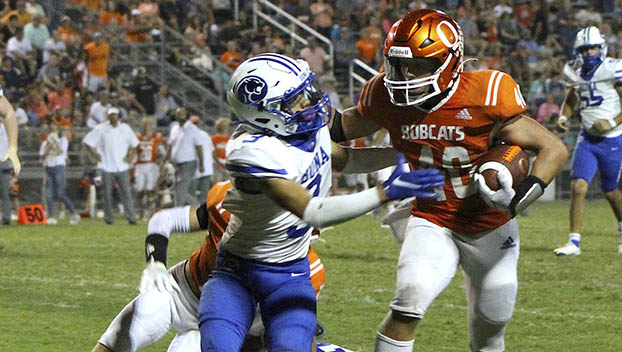 Orangefield running back Cameron Dischler (40) shakes off a Buna defender early on in the District 10-3A Division I season. (Tommy Mann, Jr./Orange Leader)

The two will bump heads at 7 p.m. Friday at Alvin ISD’s Freedom Field.

The Yoemen (8-3) have certainly had a proud tradition over the years and will look to slow down a red-hot Orangefield (9-2) arsenal.

“They have such a strong and proud program,” said Bobcats coach Josh Smalley. “They are so competitive year-in and year-out. When you play a team like Yoe, you have your work cut out for you. Our kids are really excited to get another opportunity this week and they are focused in, like they have been all year. We got our first win in the first round since 2015 last week and it would be awesome to get past that second round.”

The Yoemen knocked off Yoakum 39-28 in the bidistrict round. They finished second in District 11-3A behind 3A Division II state champion Franklin.

Cameron Yoe’s losses came in back-to-back defeats in non-district to Class 4A units Waco Cannally (45-40) and Bellville (49-14). Their lone district loss was at the hands of Franklin (63-7).

The Yoemen certainly like to put points on the board, piling up 469 on the season. Their defense has bent at times as they have allowed 361.

Cameron Yoe struggled defensively against Slot-T offenses, similar to Orangefield, in the likes of Bellville and Franklin.

“You have to kind of take that with a grain of salt, because look at those two teams in Franklin and Bellville,” said Smalley. “Those two schools have ran the offense with precision year after year. Bellville, nobody may run it like they do in the Class 4A ranks. Franklin, they are the undefeated defending state champions and have won like 27 games in a row. I’ve seen them on film and they have two backs that are simply incredible and a big old offensive line in front of them.”

Smalley feels the Bobcats have a good chance of moving the ball with their offensive line and the skills of backs Cameron Dischler, Gavin Perry-Koci and Case Singleton, along with quarterback Brayden Parker.

“Those were the two main teams that Yoe played that lined up in Slot-T formations and we’ve seen the films and it kind of gives us a look at how they want to line up,” said Smalley. “They could change up some things because anything can happen in the playoffs. We just need to execute well and not make any mistakes, like putting the ball on the ground or getting penalties to put us back behind the chains.”

Cameron Yoe likes to put the ball up in the air a little more than they like to run it. They will check in averaging 353 yards a game, 205 in the air and 148 on the ground.

The Yoemen are sparked by the quarterback play of Braylan Drake, who has completed 160-of-245 passes for 2,179 yards with 27 touchdowns and five interceptions.

“The Drake kid has a really good arm and is really accurate,” said Smalley. “They like to get their receivers in space. They have a couple slot receivers that remind me a lot of Tyreke Hill in the NFL. Then they have two tall receivers on the outside. They like to throw those quick bubble passes and let those receivers work and they are patient with it. Then they will try to get you on a deep ball with those tall kids. They are really explosive.”

“The Bradley kid has some wheels and is capable of breaking away on you if you don’t keep an eye on him,” said Smalley. “When you see their stats, it looks like they like to throw the ball a little more than running it. But when you see them on film, it looks more like fifty-fifty. They are just so talented across the board.”

Smalley said Orangefield coaches are really happy with the players, especially last week when they kept their focus and took care of the task that was at hand.

“That’s pretty much been their mindset all season,” he said. “It’s just been a special group to coach. They are excited to be playing some more football, which is something a lot of teams can’t say anymore. We’re looking for a good game on a chilly night in Alvin.”

The Orangefield-Cameron Yoe winner will face either Columbus (10-1) or Diboll (8-3) in the 3A Region III Division I Regional Quarterfinals next week.