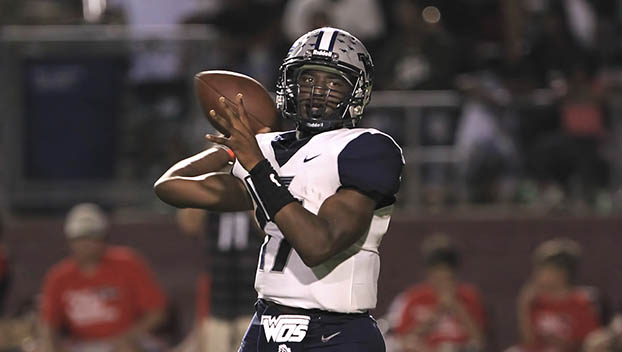 SPLENDORA – For the first time in five tries the Bellville Brahmas finally got past the West Orange-Stark Mustangs in the playoffs.

The Brahmas used a punishing running game that chewed up a ton of time off the clock throughout the night as they outlasted the Mustangs 27-20 in the Class 4A Region III Division II bidistrict playoffs at Splendora High School Friday night.

Bellville (11-0) came in undefeated but certainly got a tussle from the Mustangs (5-6), who got behind but kept battling back to make the Brahmas nervous.

“The kids gave a tremendous effort and fought all the way to the end,” said Mustang coach Hiawatha Hickman. “We came back at the end and made it a game, we just couldn’t quite get it done.”

The Brahmas collected 347 total yards, including 305 yards on 62 carries with their ball-control power offense.

Bellville running back Corrian Hood muscled his way to 165 yards on 25 carries and scored all four Bellville touchdowns. Bellville’s leading rusher on the season in Sam Hranicky, who had over 1,200 yards coming into the game, was held to 67 yards on 18 carries. It was Hood’s punishing running style, especially with carries up the middle, that proved to be a big difference.

Meanwhile, the Bellville defense held the WO-S offense in check for much of the night, limiting the Mustangs to 180 total yards.

Mustang sophomore quarterback Marcus Turner, Jr., who looks to continue to have a bright future after learning under fire this season, completed 11-of-18 passes for 92 yards. Running back Jailen Brown had four catches for 41 yards while receiver Andrew Cooper had three catches for 34 yards. The Mustangs had 88 yards on 23 carries on the ground with Turner, Jr. leading the way with 34 yards on nine totes and he had all three of the WO-S touchdowns on short keepers.

Ball control was the name of the game for the Brahmas with Bellville running 64 pays compared to the Mustangs’ 41.

“Just like at other times this year, we shot ourselves in the foot on several occasions in which we had a golden opportunity,” said Hickman. “We had some crucial penalties that set us back and a few mishandles as far as our execution on some of our offensive snaps. We’re definitely going to miss this senior group and we’ll look to come back strong next year after we hit the offseason and go back to work.”

The Brahmas snared a 13-0 led late in the second quarter but the Mustangs managed to get to within 13-6 with a nice drive at the end of the half.

Bellville defensive back Brandon Ward picked off a Turner pass at the Bellville 31 on the Mustangs’ first series.

The Brahmas then marched 69 yards in seven plays, all on the ground and Hood finished it off when he went off let tackle, hit the left sideline and went 43 yards down the left sideline for a touchdown, making it 7-0 Bellville with 8:10 left in the first quarter.

Bellville put together a nine-play, 66-yard touchdown drive and came up with a huge play to keep the series going. On third-and-22, McCann teamed up with receiver Hunter Kunkel over the middle that went for 42 yards down to the Mustang 8. On the very next play Hood snared his second touchdown of the night, going eight yards up the middle. After a botched snap on the extra-point, the Brahmas led 13-0 with a little over four minutes left in the half.

WO-S had a nice reverse call as receiver Dakarion Judge turned the corner and went 16 yards and was brought down with a horse-collar tackle that moved the ball up to the Bellville 25.

Turner Jr. had a perfect 16-yard pass to receiver Andrew Cooper that got to the 9. After Jalen Gilmore motored seven yards with a tough run up the middle to the 2, Turner Jr. scored two plays later with a one-yard keeper off left tackle.

The Brahmas outgained the Mustangs 194-60 in the half.

Bellville chewed up 7 minutes and 17 seconds on a grueling 17-play, 93-yard touchdown drive to start the second half. Hood carried 11 times for 55 yards on the march and he capped it with his third touchdown of the night, bruising his way four yards up the middle for the score, making it 20-6 with 4:43 in the third.

The Mustangs rose up and answered quickly, navigating 52 yards in seven plays. Turner connected with receiver Nicholas Crosson on a 18-yard dart to the Bellville 36 and Jailen Brown hauled in a screen pass from Turner, Jr. that went 14 yards to the 23. Jamal Shaw got loose on a 22-yard scamper to the 1 and Turner, Jr. got his second touchdown of the night with a one-yard keeper. The extra-point kick failed as the Mustangs trailed 20-12 with 1:03 in the third quarter.

The Brahmas put together another long drive, going 52 yards in 11 plays with Hood doing most of the damage in moving the sticks. Hranicky did have a big 20-yard run to the Mustang 33 for his biggest run of the game. Hood plunged into the end zone from a yard out for his fourth TD, pushing it to 27-12 with 7:32 left.

The Mustangs kept scrapping as Turner, Jr. led a 45-yard drive in seven plays to paydirt.

Turner Jr. had a 17-yard run and then got loose on a 11-yard gain to get to the Bellville 17. He found Jailen Brown on a eight-yard pass to the 11. Brown got to the 2 on a nine-yard dart and Turner, Jr. got into the end zone for the third time on a two-yard keeper. Turner, Jr. connected with Brown on the two-point conversion pass, trimming it to 27-20 with 4:42 left.

The Mustangs held Bellville on downs and got the ball at their own 25 with 2:48 left but couldn’t move the chains as Bellville sealed it.