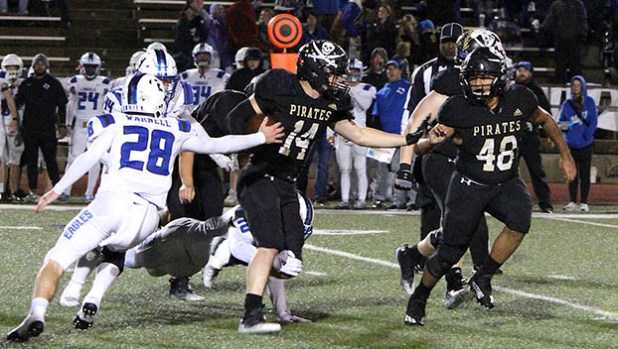 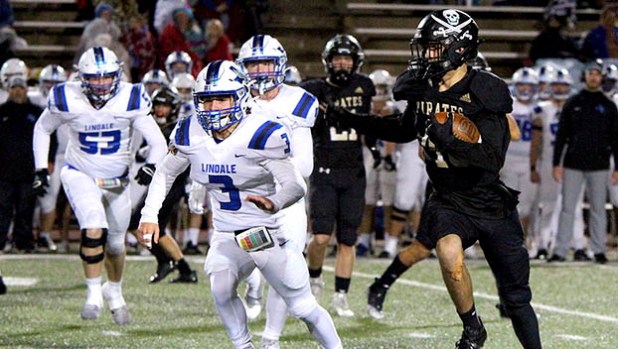 Vidor's Brayden Root (43) gets a huge gain on an end-around play against the Lindale defense. (Tommy Mann, Jr./Orange Leader)

BRYAN — The Vidor Pirates football season came to a screeching end Friday night as the Lindale Eagles secured a 45-23 victory in Class 4A Division I bidistrict playoff action.

Lindale, led by quarterback Clint Thurman, took the opening kickoff and marched the ball 60 yards in under two minutes for a quick 7-0 lead thanks to a 7-yard touchdown run by Wyatt Parker.

Vidor responded and began a methodical drive down the field. Facing fourth and one at the Eagles 34 yard line, Pirates running back Jason Watson bolted to the two-yard line setting up first and goal. However, a Vidor fumble on the next play was recovered by Lindale.

The Eagles wasted little time in taking advantage of the turnover. On the third play of the drive, Thurman dropped back and hit receiver Marcus Field on a screen pass. Field broke a tackle and raced 86 yards for the score and a 14-0 Eagles lead with 6:45 remaining in the first quarter.

Lindale caught the Pirates off guard on the kickoff and recovered an onside kick at the Vidor 49-yard line. Thurman called a quarterback draw on second and one and broke through the left side of the Pirates defense for a 23-yard touchdown and a 21-0 lead with 3:18 left in the first quarter.

The Pirates started its next drive at the 32-yard line and marched the ball 68 yards in eight plays for a touchdown. With the clock ticking down, Vidor running back Daigan Venable took the handoff to the right edge and outraced the Eagles defense to the end zone as time expired in the first quarter cutting the Lindale lead, 21-7.

Just when it seemed like Vidor might have finally generated some momentum, Thurman and the Eagles countered with its own and moved the ball 59 yards in four plays as Thurman connected with Alex Romero on a 14 yard touchdown pass to extend the Lindale lead to 28-7.

The Eagles added a 26-yard field goal following a Vidor turnover on downs for a 31-7 lead at halftime.

The Pirates took the kickoff to start the third quarter and got back to playing Vidor football with a 12-play, 75-yard scoring drive. The key play of the drive was an end-around run for 9-yards and a first down by Brayden Root. Running back Jason Watson, who gained 136 yards on 17 carries for the night, then had two consecutive first down runs. Odom then capped the drive on a quarterback sneak. Following the successful two-point run conversion, the Pirates now trailed Lindale 31-15.

Vidor (6-5) attempted an onside kick but was unsuccessful. Thurman guided the Eagles down the field, while chewing up the clock. He then scored on a 9-yard run to make the score 38-15 Lindale.

The Pirates responded, as they have done much of the season, and marched the ball 75 yards on another 12-play scoring drive. This time it was running back Dane Villadsen scoring on a 6-yard run and adding the two-point run conversion to make the score 38-23 with 11:54 remaining in the fourth quarter.

Lindale put the game out of reach and used Vidor’s tactics against them as they chewed up over 7 minutes of clock in the fourth quarter. The 13-play scoring drive resulted in a 2-yard touchdown run by Caleb Hart for the 45-23 victory.

Vidor’s season ended with the loss. Lindale (7-4) moves on to the area round to face Brazosport.