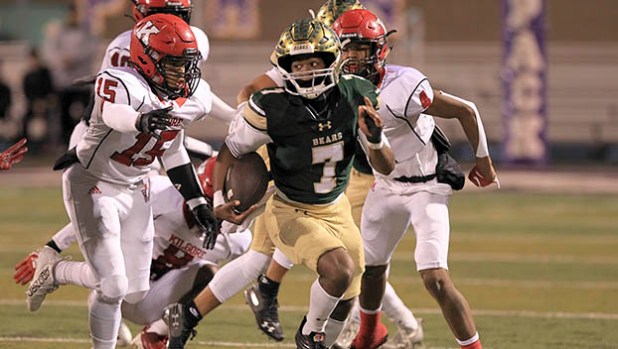 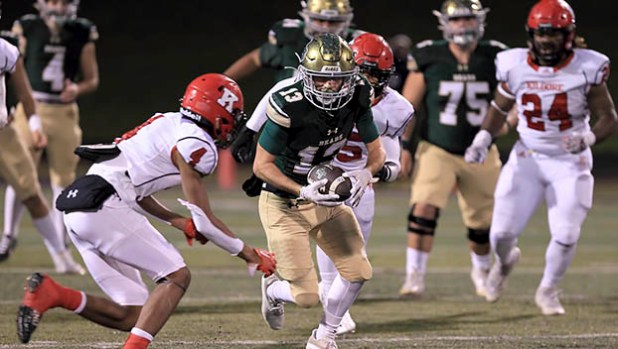 The Battlin’ Bears (6-5) entered as the underdog. They faced a Kilgore (8-3) squad that went 5-1 and finished second place in District 9-4A Division I. The Bulldogs boasted a dynamic run game and physical defense, making them a tough draw in the first round of the playoffs. A strong wind and heavy rainfall didn’t necessarily improve the game conditions either, and the result was a game of old-school, run-heavy football.

“Hats off to Coach (Clint)Fuller and Kilgore,” LCM head coach Eric Peevey said after the game. “I’m just proud of our boys for the season they had and making the playoffs for the second straight season and helping us get our first back-to-back winning seasons since the 1994-95.”

Kilgore won the opening coin toss, choosing to defer possession until the second half. The opening kick sailed into the end zone, setting LCM up at their own 25. As usual, senior running back Da’Marion Morris led the way as the engine of the Bears’ offense, gashing their opponent’s front seven for several chunk gains. LCM’s first drive took 14 plays, bringing them just to the edge of the red zone at Kilgore’s 23-yard line. Facing a fourth-and-four deep in opposing territory, quarterback Dean Reynolds attempted a short pass, but it was batted down by a Kilgore defender for a turnover on downs.

The Bulldogs took over with five minutes remaining in the first quarter. They fed senior tailback Isaiah Ross five straight carries – the senior made the most of the opportunities, gaining nearly 70 yards and a touchdown on the first drive alone. Ross scampered in for a 19-yard score, giving Kilgore a 7-0 edge.

The opening-drive sputter was a major momentum-killer for Little Cypress-Mauriceville’s offense, and they were unable to score until the three-minute mark of the second quarter. The Bears ran a reverse, with wide receiver Kyler Garlaska throwing a 35-yard pass to Morris to put LCM inside the five-yard line. Two plays later, Morris punched in a two-yard rush for a touchdown. The ensuing PAT was blocked, leaving Little Cypress-Mauriceville trailing, 7-6.

The Bears defense forced a Bulldogs three-and-out near the end of the first half, and LCM caught a lucky break when Kilgore’s long snapper sent a ball sailing past the punter. The play was downed at Kilgore’s 10, and the Bears’ offense retook the field in prime position to pull ahead. Things soon took a turn for the worst – a pass was dropped in the end zone for a sure touchdown and Reynolds’ next attempt was intercepted at the goal line.

Kilgore couldn’t drive far enough downfield to take a shot at the end zone before time expired, and the two teams headed to the locker room for halftime with the game still sitting close, 7-6. At the break, the Bears had 171 total yards, while the Bulldogs totaled slightly fewer with 155.

Kilgore had the first possession of the second half, and the Bears caught another lucky break – Ross rushed for a 59-yard touchdown, but it was called back due to holding. They weren’t as fortunate on offense, however, as LCM looked outmatched and struggled to string together any more long drives throughout the night.

The Bulldogs scored their second touchdown with five minutes to go in the third quarter. Ross broke free for a 38-yard house call, giving Kilgore a 14-6 lead. LCM turned the ball over on downs at the Bulldogs’ 43 on the following drive, and Kilgore added more cushion to their lead as Ross scored his third touchdown of the night with a 21-yard rumble.

Trailing 21-6 at the start of the final frame, Little Cypress-Mauriceville’s rough night continued when a kickoff bounced off the returner’s hands and was downed at their own five. The Bears punted from their own end zone with time running out. Dylan Payne recovered a fumble for LCM with four and a half minutes left, keeping the slim chances of a comeback alive. However, Reynolds threw another interception, which the Bulldogs returned deep into the Bears’ territory. Kilgore’s Roosevelt Rollins scored on an 11-yard rush at the three-minute mark, bringing the Bulldogs ahead 28-6.

The game was all but lost, and the final nail in the coffin for LCM was Reynolds’ third interception of the game, this time thrown deep into the end zone in a last-ditch effort.

The final yardage totals were fairly close, with Kilgore tallying 313 while LCM finished with 259. Turnovers and scoring chances left on the table were the difference-maker for the Bears, though, and their campaign came to an end with the 28-6 loss.

“Overall, we played really well at times, and we’ve had some rough moments at times,” Peevey said. “But, we’ve only had back-to-back winning seasons three times in school history. I feel like this senior group really helped continue that, and it gives us some good hope for next year.”