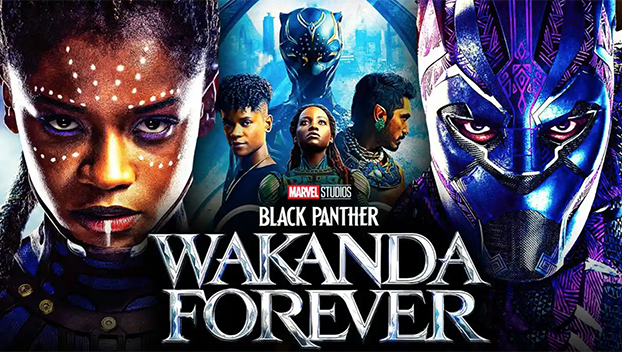 Marvel Studios movies are generally light-and-frothy affairs, but they’ve never had to deal with anything as serious as the real-world death of one of their stars.

Chadwick Boseman, who played the hero T’Challa in the original movie, passed away in 2020. His absence hangs like a funereal pall over much of this movie.

It’s a sad loss, but one that allows the film to explore the unique idea of succession within the superhero genre. Rather than simply casting another actor to take over the role, the main emotional thrust of this movie deals with the question of which character will step up and assume the mantle of the Black Panther.

As for the main plot, it involves the underwater kingdom of Talokan (Not sure why it’s not Atlantis, as it is in the comics) whose king (Tenoch Huerta) declares war on the surface world, including our heroes in Wakanda.

This gives “Black Panther: Wakanda Forever” its action set pieces, which are some of the film’s best moments, although I don’t think that they live up to the spectacle of the fights in the original movie.

That turns out to be a recurring theme in my review. It’s nice catching up with these characters, but they’re not quite as appealing as they were in the first film. The world building is still a highlight for me, but some of the new settings feel like repeats.

To be fair, that’s often the case in sequels, and “Wakanda Forever” had enough touchstone moments to draw me in, but I can’t deny that I missed the new car smell of the 2018 movie.

And I miss Chadwick Boseman. His character was such a benevolent force that he could have easily devolved into a good guy caricature. The late actor had a way of allowing the innate goodness of the character to peak out without having him feel like a simplistic token for good.

The actors in the sequel do an admirable job moving on, but they can’t quite fill Boseman’s shoes.

All of this is understandable, and absolutely forgivable. As far as sequels go, I found this one to be a lot of fun. My only major critique of the film comes from its bloated two hours and 41-minute run time. The middle part of the film, in particular, is stuffed with so much unnecessary exposition that the film began to feel like a tedious slog rather than a light-and-frothy Marvel movie.

Things do get better by the end. As I said, I did quite enjoy the film despite its length.

The problem is that I rewatched the first film before seeing this sequel. “Black Panther: Wakanda Forever” is good, but it struggles to rise to the level of the original.