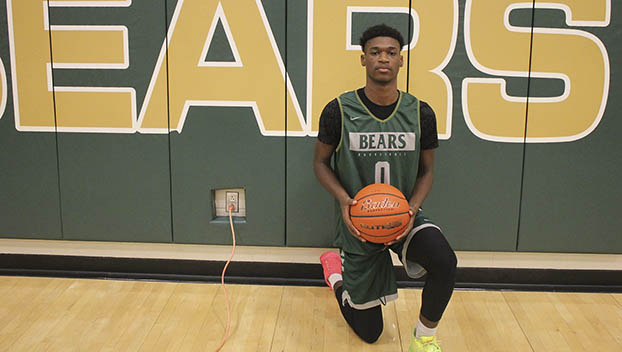 LC-M junior Alantheon Winn is preparing to help the Bears roar again this season and looks to improve from what was a superb sophomore season. (Van Wade/Orange Leader)

LITTLE CYPRESS – After having a superb season on the court as a sophomore, Little Cypress-Mauriceville junior Alantheon Winn looks to the up the ante this year when the Battlin’ Bears open up their 2022-23 basketball campaign.

Winn had a whirlwind of a season last year as he hit a lot of crucial shots for the Bears and also ignited crowds with some dazzling dunks.

Winn helped lead the Bears (24-12) all the way to the Class 4A Region III Quarterfinals.

“We had a really good season last season and started to gel together late in the year,” said Winn. “We’re really ready to bring it this year with the experience we have back. I think we can make a really good run.”

Winn pumped in 15 points and grabbed five rebounds a game last season for long-time Bears coach Brad Jeffcoat. Winn was named Newcomer of the Year on the All-Orange Leader Basketball Team. That was impressive, especially after he missed a lot of his freshman season with a broken wrist.

“It really took me awhile to get back into the swing of things last year,” said Winn. “I started the year playing football and then decided to go straight basketball. I liked football. It really helped me get stronger in the weight room, but I was glad to get back on the court.”

Jeffcoat said you could just see his confidence grow.

“It can take a sophomore time to believe in himself, but when it kicked it for Alantheon, it really kicked in,” said Jeffcoat.

“He was really rolling in the playoffs,” said Jeffcoat. “He really proved how versatile he could be. He’s a strong driver in the lane but he can really stick the three-point shot, especially from the right corner. He had four three-pointers in each one of the playoff games.”

Winn is ready to lend his talents anywhere on the floor.

“Alantheon can play all five positions,” said Jeffcoat. “We won’t necessarily put him in as the center, but he’s great at the forward spots. He has great handle skills, too, so don’t be surprised to see him running at the point this year.”

Winn is one of several key contributors back to help lead the Bears onslaught.

Senior forward Ben Elliott returns. He was tabbed the Most Valuable Player on the All-Orange Leader Team last season after averaging 22 points and eight rebounds a game.

“I’ve been playing with Ben since seventh grade in AAU ball, and he’s just an incredible scorer,” said Winn. “He can score in so many different ways and he’s really amazing when he gets hot. We’ve both been working hard. We both want to get better defensively.”

“I would say Da’Marion is the glue to the team,” said Winn. “He brings a lot of toughness. He will defend the best player on the other team and sticks to them like glue. He can also score and is really good at dishing the ball off.”

Noah Fuller brings his tenacity back, as well, with his hard-nosed defense. He was the team’s fourth leading scorer last season.

“It will be Noah’s third year on the varsity and he brings a lot of intangibles,” said Jeffcoat. “He can shoot the ball, he plays defense well and he’s always playing all-out.”

Winn can hit the long-distance shot with the best of them, but it’s his high-flying game that uplifts the team and fans.

He had a nice collection of slams last year, including one where he leaped from almost the free-throw line and flushed one home in a win over West Orange-Stark in district play.

“That was definitely a good one,” said Winn. “I didn’t realize I was that far back until I saw it on film. I do like to get some dunks in when I can. There is just something about them that gets everyone energized. I will do whatever I can to energize the team.”

Winn loves to watch the game when he’s away from the court. He doesn’t exactly have a favorite NBA star but he does like to emulate the play of a couple of them.

“I really like how smooth Bradley Beal plays, he is so tough making shots and he does it without a lot of attention,” said Winn. “I also like to watch how Ja Morant heads to the basket with authority, that’s what I want to do.”

Winn likes what the Bears will bring to the table this season.

“We’ve got a tough non-district again,” said Winn. “Houston Yates is coming here to play us. We’re going to Lake Charles to play Barbe. We’re in good tournaments in Aransas Pass and Hardin-Jefferson. That will really get us ready when district starts. Of course, Silsbee will be the district favorite again, which they deserve, but we really think we can battle them well. I really think we can make a great run and win more games than last year if we all stick together and continue to gel, because we really do have a lot of experience back and we all get along so well.”