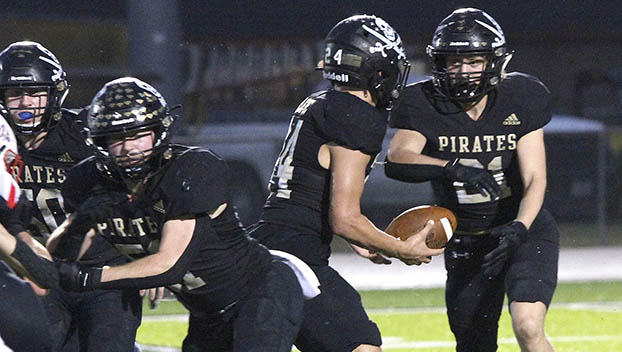 VIDOR — Looking to continue their hot streak and season, the Vidor Pirates are preparing to line up against the Lindale Eagles in the Class 4A Region III Division I Bidistrict Playoffs Friday night at 7 p.m. at Bryan High School.

The Pirates (6-4), the second-place squad out of District 10-4A Division I, have been on fire since the non-district portion of their schedule, capturing six wins in their last seven battles.

Lindale (6-4) has a lot of experience and have fought hard in the always rugged District 9-4A Division I, in which they finished as the third place playoff seed.

“It’s going to be a tough game for both teams because I think we are so equally matched up,” said long-time Vidor coach Jeff Mathews. “It’s that time of year where everything is pretty much equal and you have to be on top of your game. It’s the most fun time of the year, the playoffs, and we would love to keep this thing going.”

The Pirates program is familiar with the Lindale program. The two met in the bidistrict round in 2020, with the Eagles snagging a 29-13 victory. Lindale went on to become the state runnerup.

“I’ve known their coach, Chris Cochran, for a long time now and he even has some family here in Vidor,” said Mathews. “He’s a stand-up, class guy that has done a wonderful job with their program.”

Mathews said the Eagles’ record is a little deceptive, just by who they lost to.

“Their losses are against Gilmer, Kaufman and then Kilgore and Chapel Hill in district,” said Mathews. “Those kids have been through some battles, but it is like that every year up in East Texas.”

The Eagles definitely have a weapon in quarterback Clint Thurman. The signal caller has completed 124-of-206 passes for 1,680 yards and 21 touchdowns. He has also rushed for 1,498 yards and 17 TDs on 194 carries.

“The Thurman kid is incredible and certainly makes everything click for them,” said Mathews. “I think when they played Palestine, he rushed for about 300 yards and passed for 170 or so.”

Receiver Marcus Fields is Thurman’s go-to target with 40 catches for 780 yards and 12 TDs.

“Thurman is not the only one that can hurt you,” expressed Mathews. “They have a good stable of backs they run in and out and some receivers on the outside with speed.”

Mathews feels that the offensive line really paves the way for the Eagles.

“They are so dad gum huge and physical up front,” said Mathews. “They have a kid up front, Casey Poe, that goes about 280. He’s a beast in the trenches on offense and defense.”

Mathews hopes the Pirates can utilize their Slot-T and stay ahead of the chains against an Eagles defense allowing quite a few yards and 32.5 points a game.

The Pirates have fullback Jason Watson, who went over the 1,000-yard mark last week against Splendora, healthy enough to where he can play on both sides of the ball.

Pirates quarterback Jarrett Odom has done an excellent job at running the offensive ship and has a group of backs including Daigen Venable, Isaac Fontnow and Caleb Dean who can spread the toting wealth around.

“I’m so proud of our offensive group of late,” said Mathews. “We have not turned the ball over the last four weeks, which was killing us when the season started. Jarrett (Odom) has been so cool and calm out there. All of our backs are healthy, which wasn’t the case when the playoffs started last year. Watson is ready to roll at fullback, which is great after him having a nagging ankle injury.”

The Pirates just want to go out and play their style of game and control the tempo.

“It’s not rocket science, we want to play Pirates Football, which is to control the clock and keep those chains moving,” said Mathews. “The more we have the ball, the more the other team’s offense gets out of rhythm on the sidelines. I think the kids are fired up this week, and I couldn’t be more proud of them from where we started the season. They stayed the course and here they are, a chance to win a playoff game and represent their school, it doesn’t get better than that.”