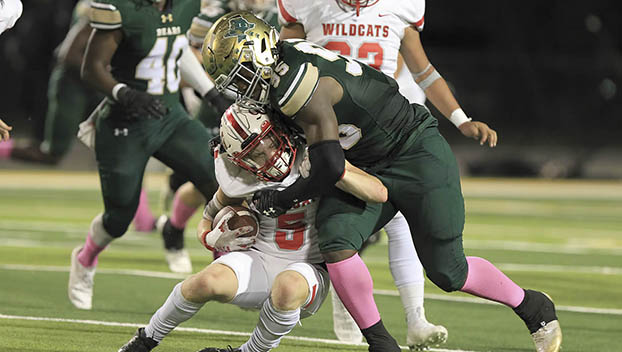 LITTLE CYPRESS – After nailing down their first back-to-back winning seasons since 1994-95, the Little Cypress-Mauriceville Battlin’ Bears have larger fish to fry this week when they take on the Kilgore Bulldogs in the Class 4A Region III Division I Bidistrict playoffs Friday night at 7 p.m. at Lufkin’s Abe Martin Stadium.

The Bears (6-4), the third-place team out of District 10-4A Division I, grabbed some momentum last week with a 48-16 win over Huffman.

Kilgore enters the bidistrict battle with a little anger after the Bulldogs fell last week to Tyler Chapel Hill 32-20 in the District 9-4A Division I title game. The Bulldogs (7-3) snared the district’s No. 2 playoff seed.

“It’s going to be a battle for us,” said LC-M coach Eric Peevey. “Kilgore, as typical of teams in that district throughout the years, is big and physical and they have a lot of speed at the skill positions. We’re going to have to bring a lot of intensity and focus into this one, because Kilgore is a big test.”

The Bulldogs spread the wealth around on offense and their main spark is senior tailback Isaiah Ross.

Ross has torched opposing defenses for 1,718 yards and 17 touchdowns on just 172 carries, averaging 10 yards a carry.

“He reminds me a lot of our very own Da’Marion Morris,” said Peevey. “He’s not a big kid, but more powerful than you think. He has great top-end speed, too.”

The Bulldogs have a very good quarterback in Damarion Van Zandt, who has completed 109-of-176 passes for 1,521 yards with 16 TDs and just four interceptions.

“He’s a big old quarterback with a good arm and doesn’t make a lot of mistakes,” said Peevey. “He’s so steady and doesn’t have a go-to receiver, he’s got a stable of them. He and Ross were both back this year after a really good seasons last year.”

The Bulldogs went 11-2 last season, advancing to the 4A Region III Division I Semifinals.

Matthew Tyeskie leads the Bulldogs with 27 receptions for 404 yards and seven TDs. P.J. Wiley has 26 grabs for 472 yards and six TDs.

“They run a true multiple offense,” said Peevey. “Most of the time they are in the shotgun but they also get under center, bring in a tight end and fullback and run some power game.”

Peevey would like to see the Bears move the chains against a formidable Kilgore defensive front.

“They ran a 3-4 scheme and they are so big and physical up front,” said Peevey. “They have three defensive linemen that are the real deal and they are hard to budge. Their linebacker group really flies to the ball.”

Peevey feels the Bears will bring their best effort to Lufkin to meet Kilgore head-on.

“This is what it is all about, making the playoffs and trying to advance,” said Peevey. “We’re going to have to play one of our best games of the year. There are coaches and players saying that all across the state this week. It’s all about winning and advancing at this point or you are done. We feel like our kids are going to put forth a tremendous effort and we’re looking forward to a good game.”

The LC-M-Kilgore winner faces either District 12-4A Division I champion El Campo (8-2) or Houston Worthing (4-6), the fourth-place team out of District 11-4A Division I, in the Area Round next week.