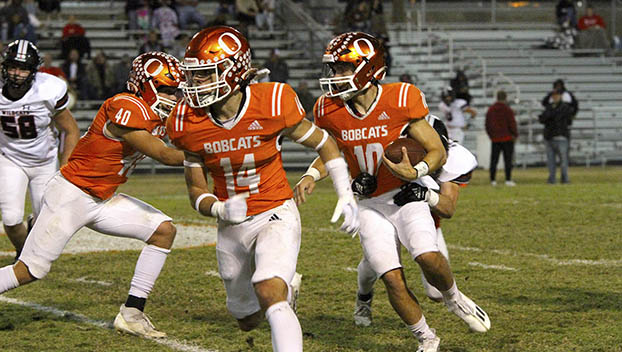 ORANGEFIELD — After claiming their first outright district crown since 1988, the Orangefield Bobcats are not resting on their laurels as they zip into the Class 3A Region III Division I bidistrict playoffs.

“The kids know what is at stake: we win and we move on, we fall, and we’re putting our pads up. It’s as simple as that,” said Bobcats head coach Josh Smalley. “We celebrated after the game last week for a few hours and then it was back to work, preparing for Shepherd. Somewhere down the road, we’ll be able to look back and reflect on what was accomplished, which will be great, but it’s all about getting ready to face the Pirates again.”

The Bobcats and Pirates met in the third week of the season in non-district play. Orangefield snared a 42-28 victory at home after jumping out to an early 35-8 lead.

“The good thing is that we are familiar with each other,” explained Smalley. “We got out ahead early and then Shepherd made some great plays late in the game to get back into it. You can’t rest with those guys, they have some really good athletes.”

The Pirates are paced by quarterback H.D. Green, who has utilized his legs more than his arm. Green has got loose for 1,198 yards and 19 touchdowns on the ground on 164 carries. He has completed 19-of-52 passes for 210 yards.

“The Green kid has some wheels and makes so many things go for them,” said Smalley. “He is similar to East Chambers quarterback Jacoby Perrault. He doesn’t throw it near as much as Perrault but he runs a lot like him. Defensively, we really have to bottle him up the best we can.”

Green is not the only Pirates backfield threat.

Shepherd running back Preston Stephens has collected 1,001 yards and 13 TDs on 151 totes.

“The Stephens kid is just a sophomore but he has had some big games lately,” said Smalley. “He and Green work well together. If their line opens up holes, both those guys can fly through them.”

Smalley hopes the Bobcats Slot-T, led by 2,000-yard senior back Cameron Dischler, along with fellow solid backs in Gavin Perry-Koci and Case Singleton and quarterback Brayden Parker, gets churning against the Pirate defense.

“One thing for sure, Shepherd has gotten a lot better on defense since Week Three and so has our offensive line, which was so inexperienced at that time,” said Smalley. “We’ve just got to try and control things up front, get our backs going and stay ahead of the chains. We can’t afford any big penalties. You don’t want that this time of the year.”

Smalley feels the Pirates have nothing to lose, coming in as a No. 4 seed.

“They could come out with some trick plays, onside kicks and they could line up in different kinds of defensive alignments just to throw us off our game,” said Smalley. “We’re telling the kids all week in practice to be prepared for anything.”

Smalley feels the Bobcats will maintain their poise.

“Shepherd is a much better team now, compared to the team we faced in Week Three,” said Smalley. “They beat a good Coldspring team recently and battled Woodville and Diboll hard in their district. Our kids have been pretty focused from week to week on what is ahead of them, and I think they will be ready come Thursday.”

The Orangefield-Shepherd winner faces either 11-3A Division I runnerup Cameron Yoe (7-3) or Yoakum (4-6), the third-place team out of 12-3A Division I, in the area round next week.