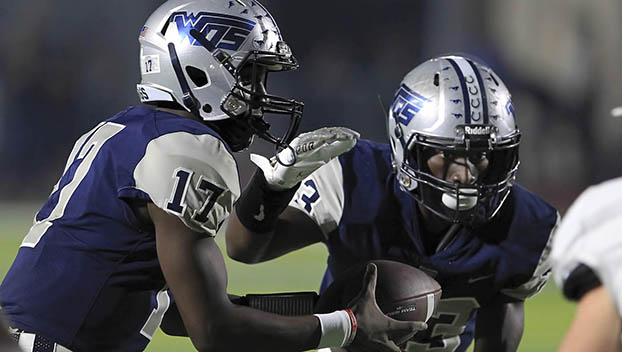 WEST ORANGE – It will not be the first “rodeo” when the West Orange-Stark Mustangs and Bellville Brahmas battle it out in the Class 4A Region III Division II bidistrict playoffs Friday night at 7:30 p.m. at Splendora High School.

However, it will be the first time in five meetings between the two schools that the Mustangs check in as the underdogs.

Bellville, the District 10-4A Division I champions, comes in flying high, sporting a perfect 10-0 record. The Brahmas have outscored their opponents 453-79.

Meanwhile, the Mustangs (5-5) are looking to make some noise as the fourth-place seed out of District 9-4A Division II and get a winning streak going.

“There are no secrets between us two, we know what each team likes to do,” said Mustangs coach Hiawatha Hickman. “This may be the best team Bellville has had that we’ve faced yet, though. They are stout on both sides of the ball.”

The Brahmas have run the Slot-T offense to near perfection over the years, and this year is no different.

“They like to run the ball and they like to get those long, sustained drives and wear people out,” said Hickman. “They are really big and physical up front and like to control the line of scrimmage. They run those vaunted sweeps on the edge and those buck traps. They are always a load to try and stop.”

The Bellville ground game is led by running back Sam Hranicky, who has bolted for 1,207 yards and 11 touchdowns on 154 carries.

After Hranicky, the Brahmas spread the wealth around so opposing defenses can’t solely concentrate on him.

Quarterback Reid McCann has completed 26-of-54 passes for 357 yards with six TDs and three interceptions. The quarterback conducts the offense but does not run much. He has 55 yards and two TDs on 14 carries.

“They have a stable of backs for sure and you have to watch for some trickery, like reverse sweeps to their backs,” said Hickman. “We have to be careful because their quarterback is capable of hitting receivers on big plays. Our biggest thing is to keep those backs in front of us, make the tackles and not let them get many yards after contact. That’s going to be huge.”

The Mustangs offense, though young, has gained valuable experience throughout the season and will look to find some big plays against Bellville.

“Bellville will come out in a 4-3 scheme on defense and they have a lot of size up front,” said Hickman. “A big thing for us will be if we can get on the edge on them with our running game and also get our passing game going with some big plays. I just think both teams matchup really well against each other.”

Hickman thinks the Mustangs have accepted the underdog role and have something to prove.

“We’ve struggled on the road this year, and they would love to change that,” said Hickman. “It’s the playoffs, so we should have some great practices this week, because this time of the year is what high school football is all about. You win, you move on. You fall, then you are getting ready for next year. I know Bellville is not too happy about playing us this early after we’ve met them in later rounds the last few years. We feel the same way. I really think whoever wins this one though, will really grab some great momentum heading into the second round.”

The winner of the WO-S-Bellville game faces either Madisonville (6-4) or La Grange (5-5) in the area round next week.