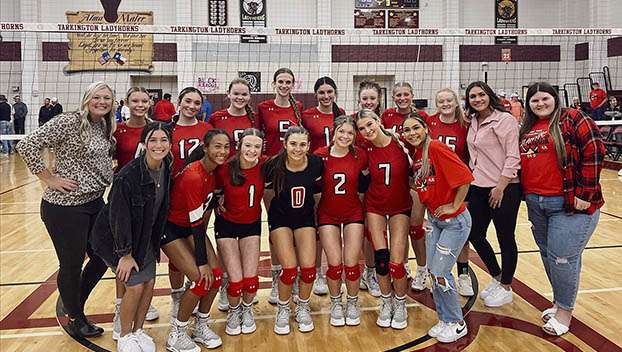 The Bridge City Lady Cardinals will face the Huffman Lady Falcons in the 4A Region III quarterfinals at Baytown Lee JC Tuesday at 6:30 p.m. (Courtesy Photo)

TARKINGTON – The Bridge City Lady Cardinals stormed past the Madisonville Lady Mustangs in the Class 4A Region III Area Round of the playoffs Friday night, winning in a sweep 25-13, 25-18, 25-15 at Tarkington High School, setting up a big battle this week.

The Lady Cardinals controlled the action against Madisonville (23-21) from the get-go.

Taryn Doiron once again set the tone offensively, collecting 21 assists to go along with nine kills and six digs.

Huffman, who has defeated the Lady Cardinals in the Regional Quarterfinals the last two seasons, defeated Gilmer 25-13, 25-12, 25-19.