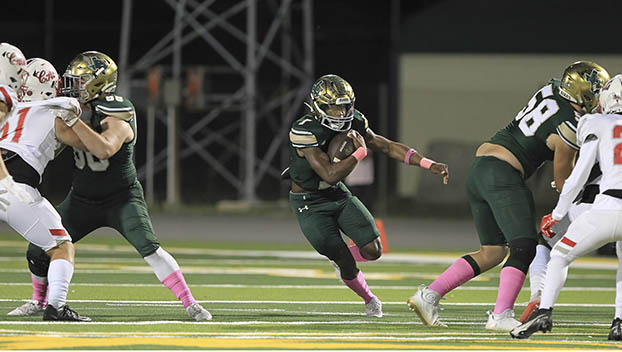 LITTLE CYPRESS – Wrapping up the regular season with style, the Little-Cypress Mauriceville Battlin’ Bears took care of the Huffman-Hargrave Falcons 48-16 at Battlin’ Bear Stadium in District 10-4A Division I play Friday night.

The Bears jumped out to an early lead and never looked back, thanks to some stellar play from their senior running back Da’Marion Morris, who put on a show in the regular season finale.

Morris wanted to make sure everyone remembered him after this game. Morris would account for nearly all of the Bears points on offense. With 27 carries and 223 yards rushing, Morris would also score six touchdowns on the ground. His speed and his patience waiting for holes to open really opened the game up for the Bears all night long.

LC-M wrapped up the third-place playoff seed out of 10-4A Division I and will move on to face Kilgore, the District 9-4A Division I runnerups, in the Class 4A Region III Division I bidistrict playoffs next week. The two teams will battle it out next Friday at 7 p.m. at Lufkin High School.

The Bears finished with 423 total yards while the Falcons had 264.

Defensively the Bears had a great game, with three interceptions on the night and only two scores against them. It was a great rebound game after last week’s tough loss at Lumberton and something to build on heading into postseason play.

Offensively for the Falcons, Tyler Wilkins was the gem of the night. He finished with six catches for 119 yards and both of the team’s touchdowns. Quarterback Tyson Woodland was able to find him for a few big plays, his longest going for 53 yards. Woodland finished with 213 yards passing.

The Bears took an early lead thanks to a quick turnover on defense. The third play of the game would be an interception from Jackson Smith, giving the Bears the ball at the Falcon 15. Morris would get four straight carries for 15 yards and a touchdown, punching it in from a yard out. After the PAT the Bears went up 7-0 early in the first quarter.

Another Bears interception set up Morris for his second touchdown of the night. Luke McDow got the pick, setting the Bears up in enemy territory again. Morris took the first handoff the distance, going 34 yards for a touchdown run. After the PAT went through, the Bears led 14-0 with just under five minutes left in the first quarter.

Morris crossed the goal line for the third time as the Bears created a three-score lead in the first quarter. The offense would move to more of the Wildcat formation, putting Morris behind center and letting him just take it himself. With five runs in a row, Morris would punch it in from a yard out for the score. After the PAT the Bears led 21-0 just before the first quarter ended.

The Morris show kept on going with another touchdown from the elusive back. This time the passing game would get involved on the drive. Quarterback Dean Reynolds, who finished with 82 yards passing, had three completions, his longest going to Elijah Allison for 16 yards and into the red zone. Morris would take over from there and scooted in from 12 yards out, breezing past the defense again. After the PAT the Bears took a 28-0 lead early in the second quarter.

Just before the first half closed, the Falcons found their first points of the game with a big passing touchdown. Woodland would pick up his passing game and start connecting with a few passes .The biggest one going for 53 yards and a touchdown to Wilkins, who outran the Bears’ defense. Wilkins would receive the two point conversion as well, making the score 28-8 with the Bears leading just before the half.

The Bears had a miscue and granted the Falcons some free points to start the second half. After forcing a punt, the Bears started at their own 7. The first play would start with a high snap going into the end zone and rolling through the back out of bounds line. After the safety, the Bears led 28-10 early in the third.

Morris responded with his fifth touchdown of the night, extending the lead. Morris took every carry on the drive, six in total, his longest going for 27 yards and a touchdown out of the Wildcat formation. The PAT wouldn’t go through, making the score 34-16 Bears with just a minute left in the third quarter.

LC-M was not done yet as Morris scored yet again, his sixth time across the goal line. After another turnover on downs by the Falcons, the Bears got great field positioning on the Falcon 36. It would take a few plays for Morris to find a hole before he scampered away for a 18-yard touchdown run. After the PAT, the Bears’ lead grew to 41-16 as the fourth quarter started.

The second string for the Bears took over late into the fourth, but that didn’t stop the scoring. William Payne would take over at quarterback, and put his legs to work, calling his own number four times. His longest was 22 yards and a touchdown. The PAT went through to make the Bears lead 48-16 with just a couple of minutes left in the game.