FILM REVIEW — Serious love for “The Banshees of Inisherin” 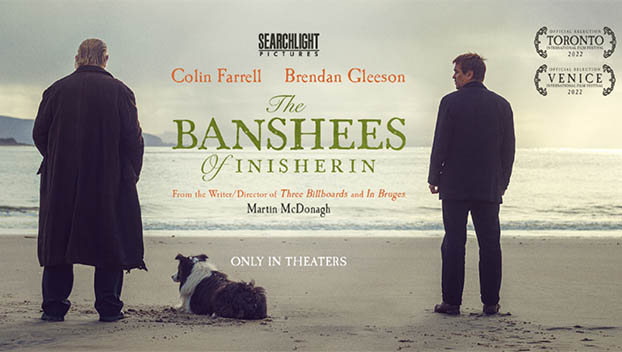 “The Banshees of Inisherin”

Let me lay my cards on the table right at the start.

I absolutely love the new movie, “The Banshees of Inisherin.” Right now I have it penciled in as my No. 1 film of the year.

This is a delightfully odd comedy from writer/director Martin McDonagh. It’s the story of two men who are best friends, right up to the day that one of them, Colm (Brendan Gleeson) tells the other, Padraic (Colin Farrell) that he doesn’t want to be friends any more.

No explanation is given, leaving the residents of their small Irish village to speculate on the cause of the breakup.

Unwilling to accept that years of friendship could end without reason, Padraic presses for an explanation, which only leads to a harsh ultimatum from Colm. The animosity escalates. Things get a wee bit bloody. Yet I found myself grinning the whole way through the absurd breakup.

Writer/director Martin McDonagh is known for bringing a wicked sense of humor to his work. Here he has drawn two full-bodied characters who are so pig-headed that it’s a lot of fun watching to see just how far they will go.

Boy, do they take things as far as they can go.

Credit Farrell and Gleeson for two amazing performances. Both are so likable that it’s easy to become invested in their friendship, assuming that they will eventually work things out, but also quietly hoping their spat will go on a little longer.

Of course, they aren’t alone in the village, which is populated by a cast of quintessentially Irish characters. From the domineering town constable who keeps the peace with a punch in the face, to the grocery shop woman who is so desperate for gossip that she reads everybody’s mail, to the creepy old crone who seems to be able to predict the future, this is a show with memorably strange characters in every scene.

The one normal character in the show is Padraic’s sister (Kerry Condon) who dreams of a better life on the mainland, but worries about how her brother would fare in her absence. It’s a superb portrait of a no-nonsense woman who is tired of all the silly folk in her village. I wouldn’t be at all surprised to find her nominated for a Supporting Actress Oscar in a couple of months.

She will probably join Farrell and Gleeson in the actor races, and McDonagh in multiple categories. Conventional wisdom says “Fabelmans” and “Women Talking” are the front runners this year’s Best Picture prize, but if there’s an underdog waiting in the wings to seize Oscar gold, right now I’d put my money on these “Banshees.”

Of course, with a name like Michael Sean McBride, I might be genetically predisposed to liking a good movie set in Ireland (I also loved last year’s “Belfast”) but I can’t shake the memory of this film.

“The Banshees of Inisherin” is the best mix of great acting, writing, direction, production design and engaging storytelling that I’ve seen in a long time.

As I said at the start, right now it’s penciled in as my pick for best film of the year.