Sweet night for Bobcats in trip to Winnie to face Buccaneers 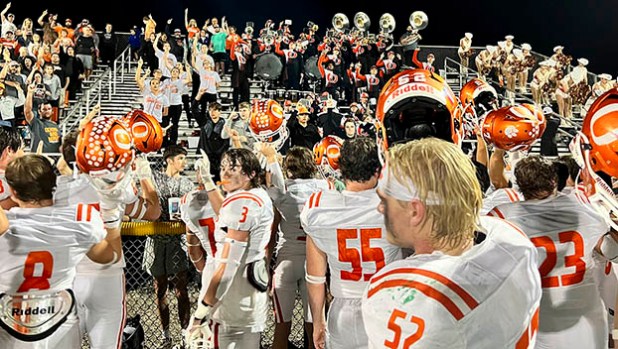 The Orangefield Bobcats celebrate as the Orangefield fans and band react after they won the district title in Winnie Thursday night. (Keagan SMith/Orange Leader) 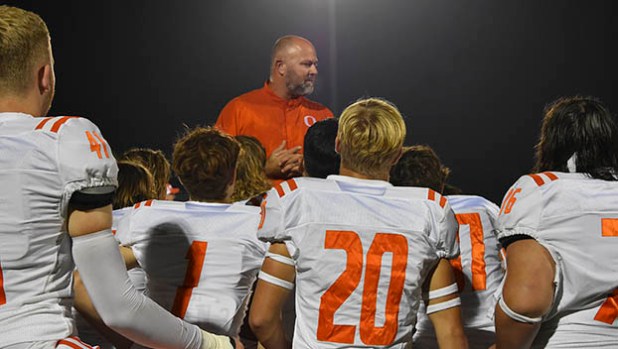 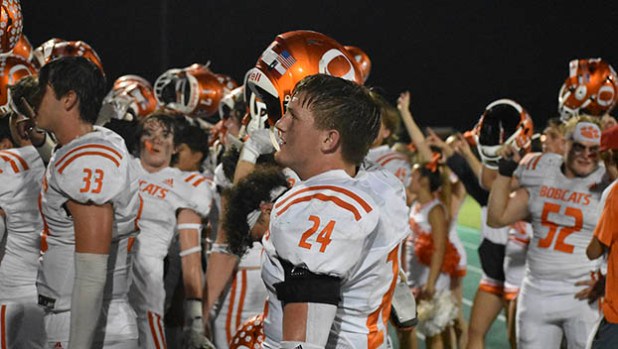 The Orangefield Bobcats raise their helmets as the band plays after they defeated East Chambers. (Keagan Smith/Orange Leader)

WINNIE – It was a sweet night to remember for the Orangefield faithful Thursday night at East Chambers High School.

Their Bobcats defeated the East Chambers Buccaneers, 28-21, claiming a first-place finish in District 10-3A Division I and claiming their first outright district championship since 1988.

“I think toughness has been the story of our team all year,” Orangefield head coach Josh Smalley said after the win. “I knew we were in for a title fight. I’m just proud of the kids, the coaching staff and the community. It feels nice for the first time since 1988 for an outright district championship to come home to Orangefield.”

The Buccaneers (7-3, 4-2) got on the scoreboard first with a methodical 15-play drive, chewing up nine minutes of the game clock before Jacoby Perrault took a one-yard quarterback sneak into the end zone. East Chambers moved ahead early, 7-0.

Orangefield (8-2, 6-0) didn’t take nearly as long to score and tie the game up. On their fourth play from scrimmage, Case Singleton broke loose with a 54-yard scamper for a Bobcat touchdown, tying it 7-7.

East Chambers retook the lead soon after, though. Perrault showed off his speed and scrambled for a 70-yard touchdown down the left sideline, outrunning several Bobcat defenders who were hot on his tail. The PAT was booted through the uprights and the Buccaneers reclaimed the edge, 14-7, just before the end of the first quarter.

On the Bobcats next drive, a costly 15-yard penalty set Orangefield back to second-and-25. Thankfully for the Bobcats, a personal foul by their opponents resulted in an automatic first down, effectively putting Orangefield just outside the red zone. Three plays later, senior tailback Cameron Dischler found the gap and scored on a 10-yard touchdown run. However, the PAT sailed left of the uprights, leaving the Bobcats trailing by one point, 14-13.

The second quarter continued on without much action as both teams turned the ball over on downs. However, Orangefield’s defense got in on the action with a touchdown of their own with three minutes to go until half. Jackson Humplik stripped the ball from the Buccaneers’ halfback, then ran it back 26 yards to give the Bobcats the lead. Dischler punched in the two-point attempt, and the Bobcats took the edge, 21-14.

As East Chambers drove downfield near the end of the first half, and Perrault threw up a prayer into the end zone with just a few seconds left. It was intercepted by Dischler, ending the first half of action.

The senior’s big night kept rolling after the half. Just 19 seconds into the third quarter, Dischler rumbled 55 yards to the end zone for his second rushing score of the night, extending the Bobcat lead, 28-14. He intercepted another pass midway through the quarter as well, marking his second turnover of the night.

Dischler entered the contest needing 170 rushing yards to hit the 2,000 mark on the season. He surpassed that with ease, finishing with 215 yards on 21 carries, giving him 2,045 yards for the season. Coach Smalley  had nothing but high praise for the senior.

“He’s a workhorse,” Smalley said. “I’m proud of Dischler. He’s the leader of the team, and there’s no doubt about it. He provides a lot for us offensively and came up big tonight with the two picks.”

The Bobcat offense ran several plays following the turnover, but turned the ball over on a lost fumble at the end of the third quarter. The Buccaneers took over entering the fourth, pulling closer on the scoreboard as Perrault connected with Payton Anderson for a 40-yard touchdown on fourth-and-seven. East Chambers crept closer, 28-21.

Orangefield then ran three minutes off the clock, but were forced to punt it away in their own territory. Their opponents were left with five minutes to put together a drive to tie the game – and the Bucs nearly did just that. With under two minutes left, they faced a fourth-and-two just inside the Bobcats’ 20. With the game and a district championship on the line, Beau Elkins made the tackle at the line of scrimmage, forcing a key stop to secure the win for the Bobcats.

“This has been a process,” Smalley said. “To win the district tonight against a really good football team in a tough environment makes me extremely proud of our kids.”