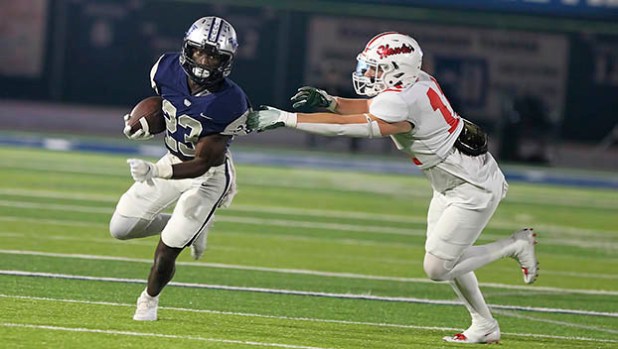 WO-S running back Isaiah Thomas (23) heads up the field and avoids a tackle by Hardin-Jefferson's Rochard Sears. (Mark Pachuca/Orange Leader). 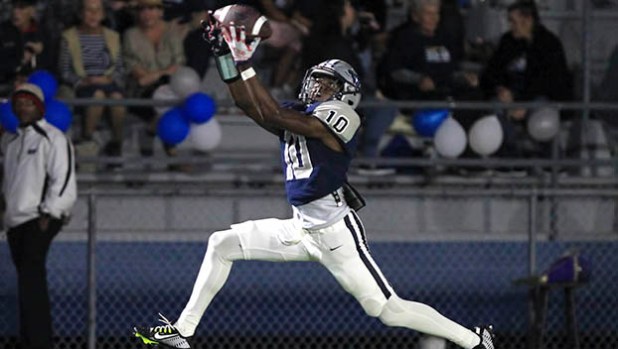 WEST ORANGE – Getting off to a dominant start, the West Orange-Stark Mustangs cruised past the Hardin-Jefferson Hawks 53-7 in their District 9-4A Division II finale Thursday night at Hooks Stadium.

WO-S totaled 441 yards against the H-J defense, 289 yards on the ground and 152 in the air. Meanwhile, the Mustang defense limited the Hawks to 180 total yards and just 32 in the second half.

Mustang sophomore quarterback Marcus Turner, Jr. completed 9-of-12 passes for 134 yards and three touchdowns. Wide receiver Andrew Cooper had four catches for 88 yards and a pair of scores. Running back Isaiah Thomas dashed for 105 yards on 10 carries and Jailen Brown had 53 yards on seven totes to spearhead the running game.

H-J quarterback Logan Trotter completed 11-of-25 passes for 148 yards. Jude Flores had three catches for 43 yards while Wyatt Samaha had three grabs for 31 yards. The Hawks could only muster 32 yards rushing on 22 carries.

“We really played well in all of the phases of the game tonight,” said Mustang coach Hiawatha Hickman. “We got our running game established early and Marcus (Turner, Jr.) made some really good throws tonight, especially on a couple deep ones,” said Hickman. “We scored every time we had in the first half. We limited our penalties tonight, so that was great. Defensively, we played really well. Their quarterback made a few good throws though.”

WO-S will now move on to the Class 4A Region III bidistrict round of the playoffs as the No. 4 playoff seed out of 9-4A Division II. They will take on District 10-4A Division I champion Bellville (10-0) next Friday at 7:30 p.m. at Splendora High School. It will be the fifth meeting in the playoffs between the two schools with WO-S winning the first four.

“Without a doubt, both programs know each other really well,” said Hickman. “Coach Randy Rowe has done a great job with that program. They run that Slot-T offense to near perfection and they can get rolling quick.. We’re glad we got this game in tonight, it gives us an extra day to get ready. It’s going to be a test for us but I believe our kids are ready for the challenge.”

The Mustangs zipped 61 yards in just six plays to hit paydirt on their first series of the night.

Isaiah Thomas carried three times for 57 yards on the march, including a 30-yard gallop around the right side to the Hawk 18. The Mustangs scored four player later when Jalen Gilmore went off left tackle for a three-yard touchdown. The extra-point attempt was blocked but the Mustangs led 6-0 with 8:39 in the first quarter.

WO-S went 50 yards in just three plays the next time they had it. Turner, Jr. bolted on a 37-yard keeper down the left sideline to the Hawk 5 and Raymond Mallett, Jr. capped it with a five-yard touchdown dart up the middle. Mallett, Jr. ran in the two-point conversion, pushing the lead to 14-0 with 7:09 in the first quarter.

The Mustangs chewed up 76 yards in 12 plays to score again on their third possession with most of the yardage coming in big chunks on the ground. Gilmore finished it with his second touchdown of the night, going up the middle from two yards out. Gilmore booted the extra-point, making it 21-0 with 11:16 in the half.

The Hawks got off the mat and put together a superb 12-play, 94-yard scoring drive. Trotter passed for 65 yards on the drive. Two of the passes went to Jude Flores for 34 yards and he hit Travis Chretien on a perfectly executed screen pass that went 31 yards along the left side for the touchdown as the Hawks trimmed it to 21-7 with 5:24 in the half.

The Hawk score didn’t phase the Mustangs because the next time WO-S had the leather Turner, Jr. hit receiver Andrew Cooper in stride down the right sideline for a 53-yard touchdown bomb, pushing the lead back to 20 at 27-7 with 4:29 in the half.

The Mustangs put together a late five-play, 46-yard scoring drive. Gilmore had a big 19-yard gallop to the Hawk 19 on fourth down and Turner, Jr. and Cooper teamed up again, connecting on a 18-yard touchdown strike along the left side of the end zone, pushing it to 33-7 with 0:32 in the half.

Turner, Jr. completed 6-of-8 passes for 100 yards in the half with Cooper hauling in four of them for 88 yards. Thomas had 57 yards on three carries while Gilmore bruised his way to 41 yards on three totes.

Trotter completed 8-of-17 passes for 108 yards for the Hawks in the half. Tight end Wyatt Samaha had three grabs for 31 yards while Flores had two for 34. Trotter added 22 yards rushing.

The Mustangs navigated 59 yards on 10 plays to score on their first series of the second half. Turner, Jr. completed two passes to Dakarion Judge, one for 15 yards to the Hawk 18 and four plays later they teamed up on a 10-yard touchdown. Judge hauled it in on the right flat and scooted into the end zone as the Mustangs led 40-7 with 6:08 in the third.

The Hawks coughed up a fumble on their series at their own 14 and Mustang back Tahj Anderson scored with a three-yard dart up the middle, making it 46-7 with 4:03 in the third.

WO-S found the end zone again in the fourth quarter, going 61 yards in seven plays with Thomas capping it with a 16-yard touchdown scoot around the left end, upping it to 53-7 with 8:17 remaining.