Vidor Pirates coach talks about what needs fine-tuning before playoffs 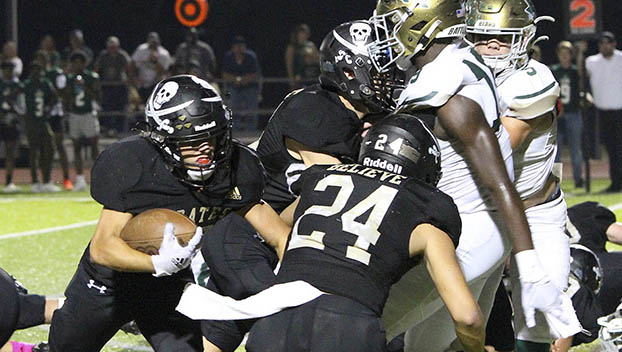 Vidor’s Daigen Venable look for a nice hole in the game against LC-M earlier this season. (Tommy Mann, Jr./Orange Leader)

VIDOR – After outscoring the Huffman Falcons 48-34 to earn the second-place playoff seed out of District 10-4A Division I last week, Vidor doesn’t want to rest on its laurels.

The Pirates look to finish out the regular season with a flurry when they welcome in the Splendora Wildcats for Senior Night Friday night at 6 p.m.

“It’s always a big win when you can go into Huffman and leave with a victory,” said Pirates coach Jeff Mathews. “Offensively, we we’re clicking all night. We only punted the ball once and we controlled the line of scrimmage. Defensively, it was crazy at times, and we blew some coverages. We were able to make some nice adjustments at the half though.”

“Splendora is going through a new system and is trying to establish things,” said Mathews. “They have a new coach in Lane Sambrooks. Watching them on film, they have some kids that play really hard. They will probably come out here swinging Friday because they have nothing to lose. We’re going to play our brand of football. We’re not a team that is just going to come out and out-athlete anybody. Everything has to be in sync. If we do that, we’ll be fine.”

The Wildcats are led by quarterback Harrison Facundo, who has passed for 749 yards and four touchdowns. His favorite receiver is Kaden Grahlfs, who has 37 catches for 278 yards and five scores, while Trey Garza is a deep threat with 10 catches for 216 yards. Dominic Rodriguez is the Wildcats’ top ground gainer with 422 yards and two TDs on 79 carries.

Mathews feels the Pirates are going to come out motivated and fired up to keep the train rolling.

“I’m so proud of the kids, maintaining their focus from going from 0-3 to winning five out of the last six,” said Mathews. “They are a proud group. They don’t want to come out and lay an egg this Friday, especially on Senior Night. We’re just looking to go out, execute our game plan and come away injury-free, because we know next week is huge.”

The Pirates have their Class 4A Region III Division I bidistrict playoff battle set.

The two teams met in the bidistrict round in 2020 with Lindale pulling out a 29-13 victory. The Eagles went on to be the state runnersup that season.

“It should be a good game. We match up well with each other and have the same style of athletes and numbers,” said Mathews. “I’m just glad we have a site already, because it’s hectic to schedule those bidistrict games with all of the playoffs games out there that first week.”