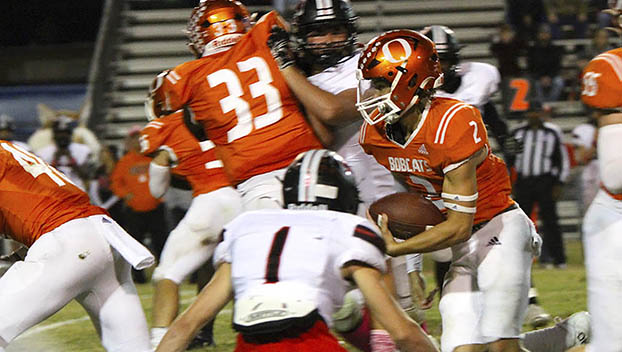 ORANGEFIELD — It would be so sweet for the Orangefield Bobcats to hang an outright District Championship banner at the Fieldhouse for the first time since 1988.

However, the Bobcats have to knock off some stubborn East Chambers Buccaneers on the road Thursday at 7:30 p.m. in Winnie to accomplish the feat in District 10-3A Division I.

“To get what we want, we have to go out and earn it. We’ve got a battle with a tremendous East Chambers team,” said Bobcats coach Josh Smalley. “Coach Russ Sutherland is one of the best coaches in the area, and their staff will be ready to go. We’re going to have to be at the top level of our game, but this is what we’ve been working for and here is our opportunity. This is a spot you would always like to be at the end of a season, playing for a district championship.”

The Bucs have been putting up nice numbers in district play. Their only two losses have come against Hamshire-Fannett (41-0 in non-district) and to Anahuac (45-20 in district).

“Their two losses are against two pretty darn good teams,” expressed Smalley. “A lot of people thought they would be a little down this year after losing a lot of seniors, especially on defense. They are coached so well and have built a great tradition, so they always just seem to reload.”

The Bobcats defense has a stern test trying to slow down quarterback Jacoby Perrault. He has completed 58-of-115 passes for 910 yards and five touchdowns. He’s dangerous with his legs as well and is the team’s leading rusher with 607 yards and 11 TDs on 72 rushes.

“The Perrault kid is a load for sure and he is what makes them go,” said Smalley. “He can fling the ball 65 yards when he has too and has a couple excellent receivers. He’s really dangerous when he decides to take off and run. He’s a handful for anybody.”

Darius Green leads the Bucs with 21 catches for 308 yards and two TDs. Payton Anderson is definitely a deep threat with 16 catches for 363 yards and five scores.

The Bucs also have a balanced rushing attack.

“They have weapons all over the field,” said Smalley. “They have multiple backs that can go and receivers that can stretch the secondary. It’s going to be interesting. We both know each other well, especially when we were in the district together three and four years ago.”

On offense, the Bobcats will look to keep on churning out big rushing numbers.

In their last five district games they have piled up 2,164 yards on the ground, averaging 432 yards a game.

Bobcats senior running back Cameron Dischler has already racked up 1,830 yards and 21 TDs. Speedster Gavin Perry-Koci has zipped for 629 yards and nine scores and Case Singleton (44-305-5) and quarterback Brayden Parker also play huge roles in getting the ground game going behind a proud offensive line that has dominated of late.

“We’ve really been running the ball well and dominating up front, especially the last three weeks,” said Smalley. “This one is going to be a little different. We’re dealing with a different beast. We have not had to play a full 48-minute game in awhile and have had some situations where we had a running clock the last three weeks. We have to have the mindset to play all the way through this week, because it could be a dogfight all the way to the end.”

Smalley is impressed with the Bucs defense.

“They have come a long way since the beginning of the year, having to replace a lot of starters from last year,” said Smalley. “Their defensive coordinator, Chris Fontenot, is one of the best in the area and has been for years and years. They have excellent linebackers and a big old defensive tackle in E.J. Guillory. They have athletes everywhere that fly to the ball. Hopefully we can get our running game established. We can’t afford those 10-yard penalties either, because that sets our offense back. We really have to execute well.”

There are plenty of playoff implications according to how the game goes.

“There is a lot on the line for us, and the kids realize that,” said Smalley. “They know what is in front of us and it’s going to be good old-fashioned football game. No doubt, if we want to win it, we’re definitely going to have to go out and battle our hardest in a tough environment on the road.”