Mustangs focus on regular season finale; plan to “set the tone early in all phases” 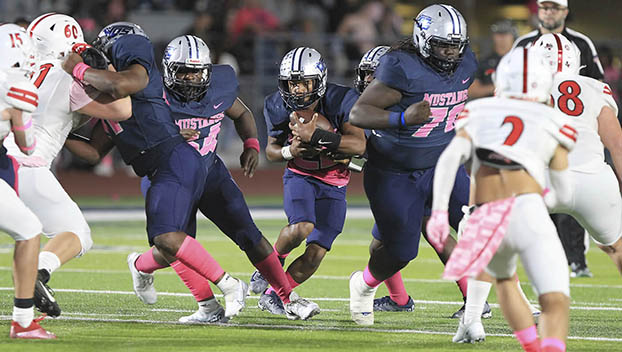 WEST ORANGE – After a week of fine-tuning and getting healthy, the West Orange-Stark Mustangs look to wrap up the regular season with flair when they welcome in the Hardin-Jefferson Hawks for Senior Night this Friday in District 9-4A Division II play at Hooks Stadium.

“We had a really good bye week,” said Mustangs coach Hiawatha Hickman. “We got some kids healed up. We spent a lot of time getting back down to the basics, working on a lot of things that we needed to work on.”

“We want to come out and set the tone early in all phases of the game,” expressed Hickman. “We want to build up some steam and prepare for the playoffs next week. We have to maintain our focus solely on the Hawks this week.”

WO-S is looking for some consistency after dropping a 34-14 road decision at Jasper in the last contest.

“The kids have really been focused on what could be ahead of them, and it has showed in practice,” said Hickman. “They know what they are capable of and they want to translate it on the field. We’re looking for a big game out of all of them.”

The Hawks have had a tough go this season under the guidance of first-year head coach Zach Bass.

The Hawks, a long time Slot-T team on offense, switched over to the spread this season and are still seeking some consistency.

They have played well the last couple of weeks. They defeated Bridge City 21-7 to nab their first win of the season a couple weeks ago and battled Jasper hard last week, falling 28-8 to the Bulldogs. They have been outscored 364-120 for the season.

“At this time of year, most football teams improve and Hardin-Jefferson has the last couple weeks for sure,” said Hickman. “They really improved on defense of late and they have a few kids that can really fly to the ball.”

The Hawks passing game was in high gear in the win over Bridge City. Quarterback Logan Trotter completed 13-of-20 passes for 212 yards and a pair of touchdowns. Receiver Rochard Sears had three catches for 128 yards and two scores.

“They have shown they are capable of hitting on some big plays,” said Hickman. “Their quarterback has a nice arm and can throw the deep ball. They have a couple good receivers and a really good tight end.”

After the Mustangs deal with the Hawks, they have to turn their attention to the Bellville Brahmas in the Class 4A Region III Division II playoffs next week. The two programs have met four times in the last seven years, with the Mustangs winning each contest. Bellville is 9-0 this season and will win its district.

“We are definitely familiar with each other, that’s for sure,” said Hickman. “We will look forward to that challenge when it arises. First thing first, we have to deal with H-J this week. We really want to finish out the regular season strong. We’re honoring 18 seniors for Senior Night and we want it to be a night that they can go out and enjoy.”