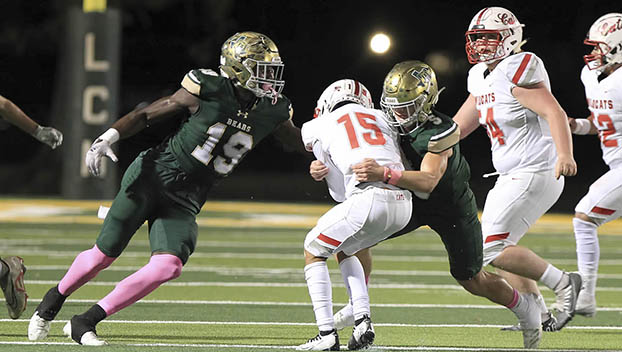 LC-M’s Luke McDow (5) and Jarvis Riley (19) make a stop on a Splendora back earlier this season. (Mark Pachuca/Orange Leader)

LITTLE CYPRESS – Though they are out of the chase as far as a District 10-4A Division district championship is concerned, the Little Cypress-Mauriceville Battlin’ Bears have a lot to play for when they welcome the Huffman Hargrave Falcons to Battlin’ Bear Stadium Friday night.

LC-M is looking to shake off a 41-7 loss to district champion Lumberton last week, while the Falcons fell to Vidor 48-34 in a score fest.

“We definitely need to prove we can bounce back, because we simply didn’t play good football at all last week,” said LC-M coach Eric Peevey. “We have a lot to prove Friday night, and Huffman is going to come in here and give it their best shot. We have to be mentally prepared in every phase of the game.”

The Bears definitely need to come out on fire. If Huffman defeats the Bears by 15 points or more, it could change the playoff seeding.

Huffman, led by first-year head coach Joey Butcha, has a roster full of underclassmen who are improving week to week.

“Huffman plays 15 sophomore and freshmen, so they are definitely building for the future,” said Peevey. “They have always had a fine program there and they are proud. They are going to come in here with all kinds of things lined up for us. We’re looking for them to do a lot of trick plays and pull some things out of the hat, so we’re going to have to be on guard for anything.”

“Huffman has a young team, but their quarterback and receiver have been together awhile and really click,” said Peevey. “They are not going to come out running the ball very much. They will be looking to move down the field with big pass plays. Hopefully we can get some heat on them and force some though throws.”

The Falcons are really young on defense. And they allowed more than 400 rushing yards to the Pirates.

“Stopping the run has not been a strong part for them, but that has a lot to do with them having such a young team that will continue to get stronger,” said Peevey. “We’ve got to be able to establish our running game and get it going, for sure.”

Peevey wants the Bears to finish strong and head into the postseason with confidence.

“With a win, it would mark our second straight winning season and a second straight trip to the playoffs,” said Peevey. “That would be a tremendous positive. The kids have to go out and earn it. It’s a big night for the senior group, and they are looking for a big crowd to get us going. We really want to finish the regular season strong, with some momentum going.”