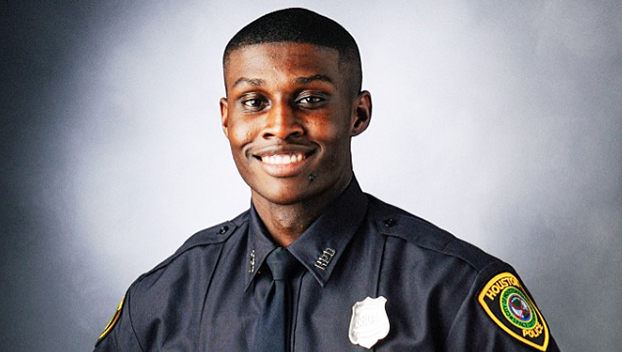 Jared K. Dupree, a 2017 West Orange-Stark graduate, was sworn in last week as an officer with the Houston Police Department. (Courtesy photo)

HOUSTON — Jared K. Dupree is constantly striving for the greater good in his personal life.

It’s a function that has brought his calling and career into harmony.

“With hard work and dedication, I know this will expand into my professional horizons of something greater, where I will continue the same commitment for public service,” Dupree recently told Orange Newsmedia.

The West Orange-Stark graduate began the next phase of life last week when he became a fulltime sworn police officer of the Houston Police Department, the fourth largest city in the United States.

“I am excited about this opportunity and committed to securing a safe community with positive communication and trust from the police,” Dupree said.

He is working under the leadership of Chief Troy Finner.

When asked by Finner as he pinned his badge, “are you ready Dupree?”

He stated, “I was born ready, Chief.”

The police cadet graduation can be viewed on YouTube: HPD Cadet Class 255

After successfully completing the TCOLE Exam (Texas Commission on Law Enforcement), Dupree was assigned to the HPD – Westside Division.

The former WOS Mustangs “honor student” graduated in 2017, where

Continuing to college, Dupree earned his Bachelor of Arts at the University of Texas, graduating May 22, 2021.

The former UT Longhorns competed in Track & Field in the high jump and was a member of the 2021 Men’s Outdoor Track & Field National Championship Team.

He is the son of Linda Platt-Bryant and Keith B. Dupree. He is the grandson of

the late Carl Platt Sr. and Mrs. Helen J. Platt of Orange and the late – Earl