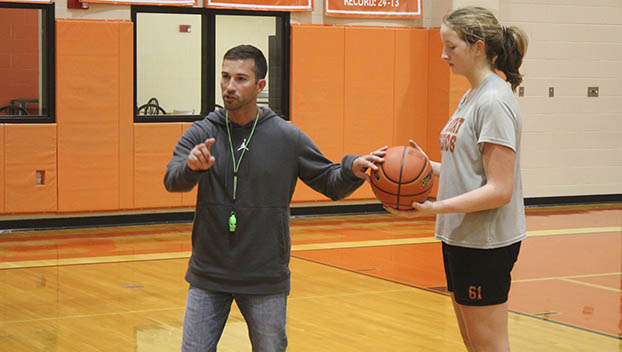 ORANGEFIELD – First-year Orangefield Lady Bobcats basketball coach Eric Girola likes what he has seen out of his young basketball hoopsters after having more than a full week of practice.

“I’ve seen a lot of energy and enthusiasm out of the kids, and you love to see that,” said Girola. “We’ve been having a lot of morning practices with our volleyball team still playing well as they head to the playoffs. We’ve been able to get a couple afternoon workouts in as well and the kids have responded.”

No doubt, Girola knows what it takes to be a conductor of a winning program.

“I had some awesome years at Buna and was fortunate to work with some great people there over the years, too,” said Girola. “There are so many similarities between the two schools. They are both smaller schools and are tight-knit communities. Plus, both schools carry excellent basketball traditions. We played Orangefield quite a bit while I was at Buna, and both have great fan bases.”

Girola said he is really starting to get an understanding of what Orangefield has, and the coaches have been a big help.

“We got a few new faces just today with the underclassmen they played on the subvarsity volleyball teams and it really helps our numbers,” he said.

Varsity letter winners Jaylyn Alfaro and Sterling Richard have been leading the early practices and are beginning to gel with some of the younger players.

Girola also realizes after coaching many years in Class 3A, athletes need to be shared and he has key players on the volleyball team that earned the second-place playoff seed out of District 22-3A. The volleyball Lady Bobcats start the playoffs Tuesday.

“We have some key players coming off the volleyball team and we wish them continued success,” said Girola. “Harleigh Rawls and Greenlea Oldham were nice scorers, big rebounders and good defenders last year. We also have Brianna Moore and Kaylea Gravett that are expected to give us a boost.”

As usual, the Lady Bobcats have a formidable non-district schedule to prepare them for district play.

“We’ve got games lined up with WO-S, Newton, Jasper, West Brook and Lumberton,” said Girola. “They each have tremendous athletes, and that will certainly help us improve, playing those kind of teams. We’re also looking forward to going to the West Tournament the first week of December. It gives us a chance to get away, play people we normally don’t play. Trips like that can really help build team chemistry.”

The Lady Bobcats host their annual Bill Tennison Tournament, which is Dec. 27-28.

The Lady Bobcats play a heavy 14-game district schedule, starting Dec. 6 when they travel to Kountze.

“That’s a tough district opener, because Kountze has some talent and skill that is returning,” said Girola. “I’ve coached in this district and against the teams we’re facing for a long time and there is some talent for sure. I know we’re moving out of the 4A district back down to 3A. I tell the girls that instead of being the hunter, we will be the hunted since we’re the big school on the block. I think we can really build something special. The foundation is always here at Orangefield, and I want to help continue what has been such a great tradition.”