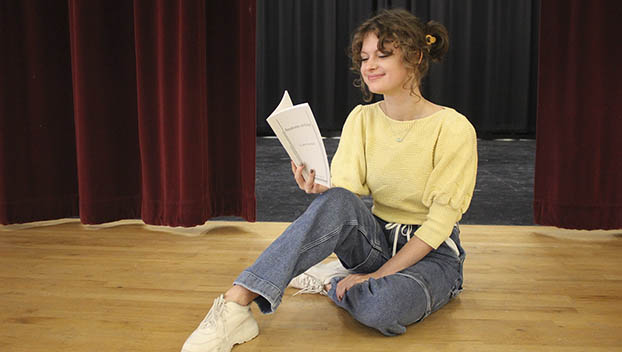 Bridge City senior Ava Gassen is thrilled to have had such great roles playing Anne Sullivan in The Miracle Worker and Lady MacBeth in MacBeth. (Van Wade/Orange Leader)

Whether it is bringing her ‘A’ game to the stage, where she shines as a theater student, or enlightening fellow students with her art work, Gassen is a true “diamond” in representing her school.

She also is a member of the National Honor Society and decided to join Student Council in her final high school year.

“First and foremost, I know grades are the most important thing and I’ve always pushed myself to keep them up year after year, because it really helps when you start trying to get scholarships,” said Gassen. “I always took pride as far as being in the National Honor Society. I was in it in middle school and junior high and now in high school. I remember in junior high people always thought I was the ‘brainiac’ or ‘quirky’ girl, and I can remember people always wanted to sit next to me a lot when it was test-taking time. The funny thing is that I’m still considered ‘quirky’ among a lot of my classmates, which I love now.”

Gassen is certainly vocal in everything she does, which draws a lot of positive energy.

“I wouldn’t call myself a ‘chatter box.’ I just like to cheer up everyone around me and try my best to put smiles on everyone’s faces,” said Gassen. “I’m always here to lend a helpful ear to anyone that wants to talk.”

Her spirit is contagious, according to Royal.

“She’s definitely a talker, but in such a positive way,” said Royal. “She’s a tremendous leader in our theater department. Those kids just love her to pieces and they really enjoy learning how to shine on that stage with her.”

Theater is where Gassen thrives, ever since she was a freshman.

She fell in love with it because you can act like anyone you want and bring so many different personalities to it, from drama to comedy.

Gassen said theater teachers Allison Haynes and Kaitlyn Haynes give their students so much confidence.

“They really let us get creative and let us feed them ideas too,” said Gassen. “They are both so great and they are so fun. They let us hang out at their house a lot, too, where we all get together and work. It’s a blast.”

Gassen has been involved in 10 plays thus far in high school. She likes comedy roles, but drama is her favorite.

Her favorite role was playing Anne Sullivan in The Miracle Worker.

“The Miracle Worker is mainly based on the story about Anne Sullivan and her struggles to teach the blind and deaf Helen Keller how to communicate,” said Gassen. “Anne Sullivan breaks down Helen’s walls of silence and darkness through persistence and love. When I first read the script, I was automatically hooked and eager for the challenge. It was so awesome to play her.”

Gassen has also been involved in several one-act plays, and the theater group also performed in the troop de jour, which features Shakespeare plays. She also enjoyed playing Lady MacBeth.

“We have so many freshmen that were eighth graders last year that came to our shows and they are so thrilled to be with us this year,” she said. “You can just see their excitement. There is one thing about theater students, we are not shy. They ask me so many questions, and I love being there for them. I’m always open for giving out advice, and I even learn things from them.” 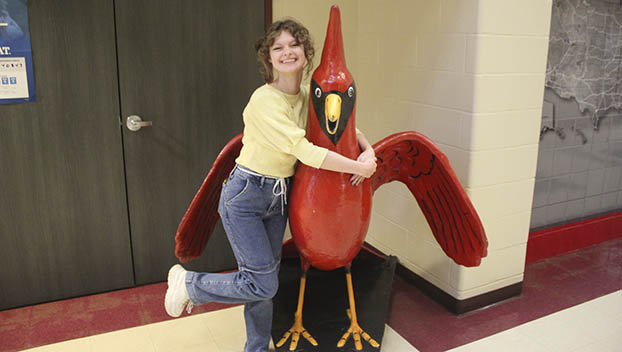 Bridge City senior Ava Gassen has utilized her bubbly personality to great use as a leader on the Bridge City High School campus. (Van Wade/Orange Leader)

Gassen is an avid art student, racking up numerous awards.

“I really started loving art and dabbling in it when I was in sixth grade, and it is so much fun to put ideas on a page and paint and brush,” said Gassen. “I’m constantly thinking about what I can do next, always thinking outside of the box.”

Gassen’s artwork has won Best in Show at the most recent YMBL Rodeo.

Royal likes how Gassen pushes herself.

“Ava is so enthusiastic at everything she attempts to do,” said Royal. “She’s tremendous in all of her classes. She’s just a student that tries to be the best version of her self each and every day. She just soaks it all in, eats it up and has a blast coming to school.”

Parents Sarah and Karl Gassen have been avid supporters in Ava’s exploits.

“My Mom makes sure I’m so balanced and is there for everything,” said Gassen. “She keeps all of my events and things like my practice schedules in her event planner and makes sure I never miss a beat.

“Dad just eats everything up. He likes to go overboard, spending money on extra supplies that we need in theater. He is always there for me, critiquing my lines and monologues. They are both so great and are so happy that I get to enjoy the things that I love the most. They have always been like that.”

Gassen is really enjoying her first year on the Student Council after wanting to see what it was all about.“

So many times we tend to start hanging around our own groups,” she said. “Like I was always hanging around the theater kids, art students and the band kids. Being in Student Council has allowed me to get to know so many more people, not only from our school but others. It’s been a great experience.”

Gassen’s goal is to go to the University of Texas and major in theater & dance, because UT is known for a great program.

“I want to minor in psychology, too,” she said. “I’m the type of person that is always wanting to help and encourage people, whether if I’m on a stage or just out and about.”