Vidor Pirates tangle with Huffman in 10-4A DI score fest 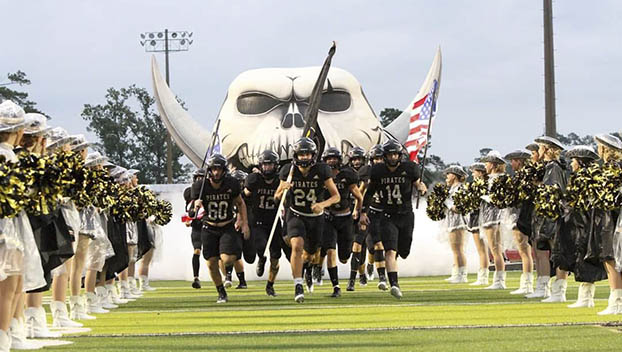 The Vidor Pirates snagged the second-place playoff seed out of District 10-4A Division I with a big road win at Huffman Friday night. (Tommy Mann, Jr.)

HUFFMAN – It took a score fest to get it done but the Vidor Pirates secured the second-place playoff spot out of District 10-4A Division I with a 48-34 victory on the road over the Huffman Falcons Friday night.

Vidor Pirates moves to 5-4 on the season but more importantly to 3-1 in district while Huffman falls to 3-6 overall and 1-3 in district.

The Pirates have now won five out of their last six games.

The Pirate offense was on point all game long, only having to punt away once, putting together scoring drive after scoring drive. The person responsible for capping off most of the drives was Jason Watson in the backfield. The big running back rushed 15 times for 126 yards and four touchdowns. Watson was able to break plenty of tackles and get big gains for the Pirates all night long.

For the Falcons, wide receiver Tyler Wilkins would have a crazy game. He was the main weapon for the offense and they weren’t trying to hide it. With seven catches, 225 yards and five touchdown catches, he was able to just outrun the Pirate secondary time after time and quarterback Tyson Woodland, who completed 14-of-36 passes for 306 yards, made sure to find him as often as he could.

The Pirates jumped out to an early lead, with an opening drive touchdown. The Pirates would got a great kickoff return from Bryce Dubose to put them inside Huffman territory to start. After a couple of short runs from a couple of rushers, Watson broke off a 23-yard touchdown scamper for the Pirates. After the PAT the Pirates led 7-0 with just over 10 minutes left in the first quarter.

The Falcons fired back with a quick passing touchdown in response to the Pirates’ early score.

Woodland would find two passes this drive, the big one going to Wilkins for 44 yards and the touchdown. After the PAT the Falcons tied the game at 7-7 early in the first quarter.

The Pirates didn’t miss a beat and put up another touchdown after a solid drive dominated by their run game. Isaac Fontnow, who had 90 yards on 11 carries, had the big rush of the drive with a 13-yard toss around the outside, just one of the six first downs on the march. Watson would get another touchdown with a five-yard run up the middle. After the PAT the Pirates went up 14-7 with two minutes left in the first quarter.

Vidor put together a steady 16-play drive for another touchdown score. The whole running back corp would get in on the action this drive, chipping away chunk after chunk to make their way down the field. After six first downs, Daigan Venable, who darted for 130 yards on 19 carries for the night, punched it in from two yards out for the score. After failing on the two-point conversion, the Pirates led 20-13 midway through the second quarter.

Woodland spotted Wilkins for their third touchdown connection in the first half with a big play. With less than two minutes left in the half and down by a score, the Falcons put together a quick drive and a big play for points. Woodland would connect with four passes on seven attempts on the march. The big play was a 39-yard pass to Wilkins over the middle, racing past the Pirate defense for the score. The Falcons closed the gap as the half ended, tying the game at 20-20.

The Falcons got the ball to start the second half, but the Pirates would stop them and block the punt to give the Pirates great field position. Watson would get two carries for 10 and 2 yards and a touchdown. After the PAT the Pirates took the lead again to make the score 27-20 early in the third quarter.

Watson puts in his third touchdown of the night thanks to another defensive turnover from the Pirates. After a fumble recovery the Pirates were ready to extend their lead as quick as possible. Watson started things with a 25-yard run, followed by three quick and big first downs, including a four-yard touchdown run. After the PAT the Pirates lead jumped out to 34-20 midway through the third quarter.

Huffman kept the Pirates within reach with another touchdown pass to Wilkins to shrink the lead. After a great kickoff return to get the ball to the Pirate 30, it would only take three passes tor each the end zone, the scoring pass going to none other than Wilkins again for a 14-yard score. After the PAT the Pirates led goes to 34-27 late into the third quarter.

Watson kept up the scoring affair with another touchdown. Venable set up the score with a few solid runs up the middle, after starting inside the Falcons territory again. Watson capped it off with a 13-yard run followed by a five-yard touchdown run. After the PAT didn’t go through, the Pirates led 40-27 as the fourth quarter started.

The Pirates get another touchdown thanks to Watson, but this time he did not have the big play of the drive. Venable broke off a massive 48- yard run after the Pirates forced a turnover on downs.

After the big play Watson was able to walk it in from four yards out for the score. After the two point-conversion was good the Pirates led 48-27 in the fourth quarter.

The Falcons did not go down quietly as Wilkins found another catching touchdown from Woodland. Three quick passes resulted in Wilkins finding the sideline for a 15-yard touchdown grab for another score.

The Pirates will close out their regular season next week when they host Splendora while the Falcons will try to keep their playoff hopes alive when they visit Little Cypress-Mauriceville.