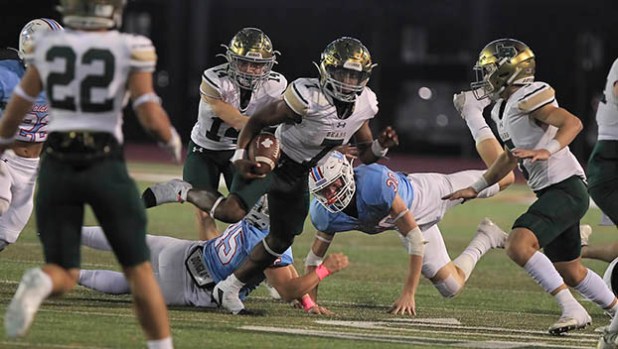 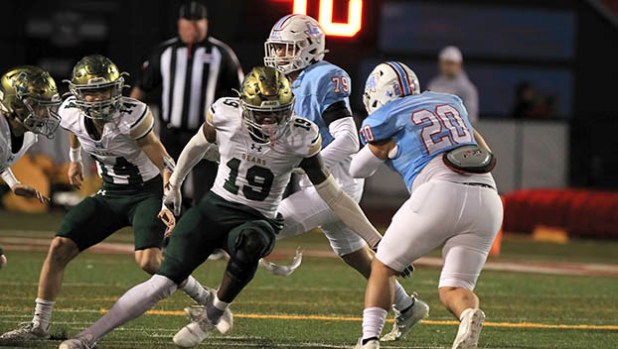 LUMBERTON – The Little Cypress-Mauriceville Bears were unable to overcome an early deficit in a District 10-4A Division I matchup against the Lumberton Raiders, losing 41-7 on the road Thursday evening.

“We got pushed around and didn’t play very well at all,” Bears head coach Eric Peevey said postgame. “We just lost to a better team.”

Lumberton (8-1, 4-0) won the coin toss, choosing to defer to the second half. On the opening kickoff, the Bears’ returner muffed the kick, resulting in a lost fumble recovered by the Raiders at LCM’s 30. After just three plays from scrimmage, Raiders’ halfback Jaddon Ward took an outside pitch 16 yards to the house for Lumberton’s first touchdown.

Little Cypress-Mauriceville’s offense went three-and-out on their first two possessions of the night, punting from inside their own end zone on the second drive. Lumberton’s quarterback Lucas Powell, who briefly exited the game on the Raiders’ second drive following a hard hit, returned to the huddle and immediately threw a 37-yard touchdown pass to Brady Fuselier. With four minutes remaining in the first quarter, Lumberton already held a 14-0 lead.

The Bears (5-4, 2-2) moved the ball better to end the first quarter, with quarterback Dean Reynolds finding Da’Marion Morris for gains of 13 and 11 yards. They crossed midfield into Raider territory for the first time, but Reynolds fumbled the ball near the Lumberton 30. Brock Jackson recovered for the Raiders.

While LCM’s defense held up and forced a Lumberton punt, the offense didn’t fare as well. On their next series, the turnover problems continued as Reynolds fumbled the snap, resulting in another lost opportunity.

The Bears’ defensive front would go on to force a crucial stop on third-and-goal from the Bear 4, tackling Ward for a loss of four. Instead of going for it on fourth down, Lumberton chose to kick a 22-yard field goal to make it a three-score game, 17-0. The Raiders then held LCM- to another three-and-out, regaining possession with four minutes until halftime. They drove downfield, kicking another field goal from 20 yards out to extend the lead, 20-0, at the midway point.

The Raiders struck again just 45 seconds into the second half as Powell threw the ball to Trey Kersh, who weaved between defenders for a 33-yard touchdown. Lumberton kept their foot on the gas, pushing the score to 27-0. A 15-yard penalty was enforced on the kickoff, and the Raiders’ special teams unit recovered the ball for the second time on the night. Luckily for the Bears, their opponent’s 37-yard field goal attempt would fall short to end the drive. However, LCM still trailed, 27-0.

Little Cypress-Mauriceville’s offense still looked outmatched, turning the ball over on downs at their own 40 halfway through the third quarter. The defense was once again gashed for big gains by Jaddon Ward, setting the Raiders up for a 12-yard touchdown pass from Powell to Cole Rhodes. The Raiders remained far ahead, 34-0.

Lumberton scored again to begin the fourth quarter as Powell lobbed a pass deep downfield, hitting Fuselier in stride for a 73-yard touchdown reception. The Raiders ran up the score, making it a 41-0 ball game.

The Bears did narrowly avoid being shut out, forcing a turnover and then stringing together a scoring drive in the final minutes of the game. William Payne entered the game at quarterback, throwing a pass to Elijah Allison for 24 yards before finding the end zone on a six-yard scamper. The offense found their stride too little, too late though, and Little Cypress-Mauriceville fell in a tough loss, 41-7.

The Bears sit in third place in 4A-II District 10 with a 2-2 record in district play (5-4 overall). They’ll have a chance to right the ship at home against the Huffman Hargrave Falcons next week. The Bears can earn the third-place playoff berth with a win over the Falcons.

Asked what it’ll take to bounce back next week, Coach Peevey’s answer was simple.

Lumberton will close out its regular season with a trip to Livingston to face the Lions.