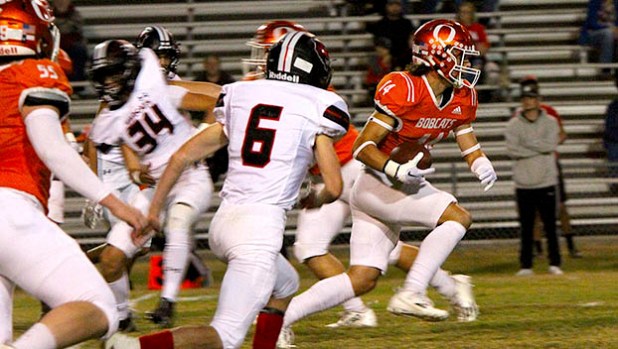 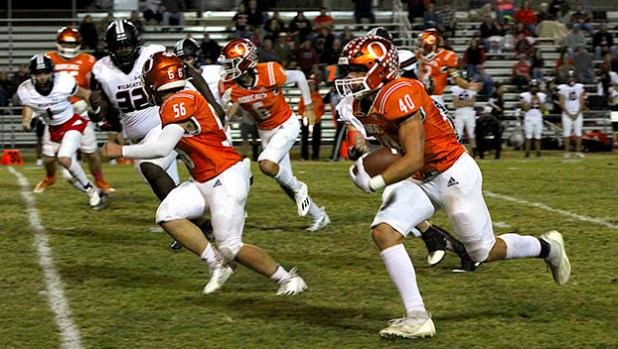 ORANGEFIELD – Setting themselves  up for a possible outright District 10-3A Division I title next week, the Orangefield Bobcats throttled the Kirbyville Wildcats at F.L.McLain Stadium Thursday night and they did it quickly.

The Bobcats scooted past the Wildcats 58-0 and it never was a contest as they built a 48-0 lead by halftime.

The Bobcats (7-2, 5-0) will have a shot at their first outright district title since 1988 when they travel to East Chambers next week to take on the Buccaneers (7-2, 4-1). A win over the Bucs would seal the crown while a loss could force a three-way tie between Orangefield, East Chambers and Anahuac.

Orangefield raced out to a commanding 48-0 lead by halftime against the Wildcats (3-7, 2-4) and the teams decided to have a running clock with 2:38 left in the first half.

“We came out and got a big kickoff return to set up a score, a quick scoring drive after that and then a scoop and score and we were up 21-0 with over nine minutes left in the first quarter, so we had some steam going early, which was big,” said Bobcat coach Josh Smalley. “I’m super proud of the kids. They maintained their focus all during our bye week. They have not been looking ahead, it was all about Kirbyville this week. They have approached it one week at a time, now we get to play for something special.”

The Bobcats will now prepare for a formidable East Chambers team.

“I told the kids, not to knock our last few opponents, but we’re going up against a really good program that has some super athletes and a great coaching staff in East Chambers,” said Smalley. “They (East Chambers) were young when the season started but they have made great progression week to week and that’s a credit to their coach Russ Sutherland and staff. I know they really want to beat us bad so they can share the title and we want to beat them bad because we have a chance to accomplish something for the first time in 34 years. It should be a great game and our kids better be ready to bring it because East Chambers will be ready for us.”

Against Kirbyville, the Bobcats powered their way to 452 total yards, all on the ground, on just 36 carries.

Bobcat senior running back Cameron Dischler finished with 217 yards and four touchdowns on just 16 rushes. Tailback Gavin Perry-Koci zipped for 127 yards on just seven totes and had a TD.

The Bobcat defense limited the Wildcats to 118 total yards, shutting the Kirbyville ground game down. The Wildcats had just 98 yards on 36 attempts on the ground.

The Orangefield running game was churning out rushing yards in bulk in the first 24 minutes. The Bobcats had 288 yards on just 20 rushes in the first half.

Perry-Koci sprinted his way to 127 yards and a touchdown in the first half. Dischler bulldozed his way to 110 yards and three TDs in the half while Case Singleton scored both times he had it, rushing for 35 yards on two totes.

Meanwhile the Bobcat defense didn’t even budge against the Wildcat offense. Kirbyville had just 76 yards in the first half and just 62 yards on the ground on 24 rushes.

The Bobcats wasted no time with some fireworks. Dischler opened the game with a 62-yard kickoff return to the Wildcat 17. On the first play from scrimmage quarterback Brayden Parker scooted up the middle for a 14-yard gain to the 3. Dischler capped it with a three-yard touchdown plunge off left tackle. Ty Butler booted the extra-point, giving the Bobcats a 7-0 edge with 11:13 in the first quarter.

Utilizing a short field after Mason Houghton brought back a punt 25 yards to the Wildcat 38, the Bobcats hit paydirt again four plays later.

Perry-Koci broke some tackles and got loose for a 13-yard gain that got to the Wildcat 21 and Dischler got into the end zone again, scooted around the right side, dodging a couple Wildcat defenders and scoring from 21 yards out to make it 14-0 with 8:45 in the first quarter.

Things kept snowballing for the Wildcats. Kirbyville running back Azion Mahathay coughed up the ball at about the Wildcat 12. The ball rolled all the way to the 3 where Bobcat Mason Manning scooped it up and scored, pushing it to 21-0 with 8:23 still in the first quarter.

Perry-Koci got loose on a big one, going 54 yards down the left sideline to the Wildcat 2. Two plays later Case Singleton scored on a one-yard run up the middle, giving the Bobcats a huge 28-0 cushion with 3:18 in the first quarter.

The Bobcats scored on their first drive of the second quarter, navigating 63 yards on just five plays.

Perry-Koci carried twice for 44 yards on the series, including a 35-yard touchdown scamper right up the middle after getting loose from a couple tackles, making it 34-0 with 9:04 left in the half.

The Bobcats got on the scoreboard again with 5:37 in the half when Dischler took a handoff up the middle. Looking as if he was going to be wrapped up by three Wildcat defenders, Dischler muscled his way through the muck and broke away for a 38-yard score, upping it to 41-0.

Utilizing a short field, the Bobcats scored another touchdown with 2:38 in the half when Singleton cashed in on his second touchdown, with a 33-yard scoring jaunt right through the middle of the Wildcat defense, making it 48-0.

With the clock running to start the second half, the Bobcats kept the Wildcats on their heels when Dischler took a pitch and motored around the left side, hit the sideline and went 57 yards for a touchdown, pushing it to 55-0 with 9:24 in the third.

The Bobcats went on a six-play, 50-yard drive late in the third quarter and settled for a Butler 20-yard field with 0:33 in the third, making it 58-0.

Mahathay had 42 yards on 19 carries for the Wildcats. Quarterback Jace Huffman rushed for 33 yards on nine carries and completed 3-of-12 passes for 20 yards. The Bobcats did not attempt a pass the whole night.