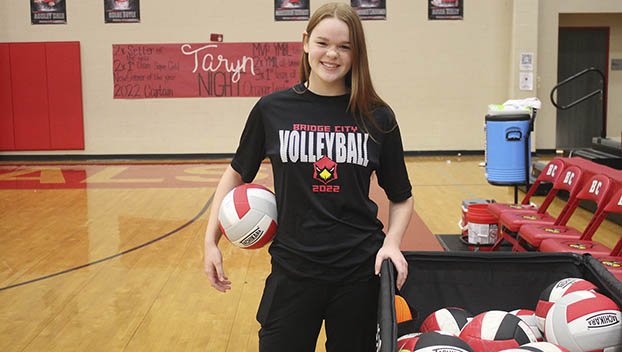 Bridge City freshman Anna Kelly has adapted nicely to the varsity level and has been a major sparkplug in helping the Lady Cardinals to their third straight district title. (Van Wade/Orange Leader).

She has played volleyball for practically all of her life, but to make it to the varsity level all season as a ninth grader has been quite an honor.

“It’s something I was really going for this year and I thought I could really contribute,” said Kelly. “The best thing is that I’ve received so much support from all of my teammates and coaches. They have really boosted my confidence, and I’ve been able to really progress my game. I strive to keep on improving.”

Kelly has shined for the Lady Cardinals, along with several underclassmen as Bridge City (28-10) rolled to a perfect 12-0 record to win District 19-4A for the third straight year.

“It’s really been so awesome to watch us grow as a team,” said Kelly. “We played a tough schedule in non-district and had a lot to learn. Everything started to click once everyone settled in, learning our offensive and defensive schemes. Once district started, we knew we had a chance to make a really good run.”

Kelly, along with fellow freshmen Cambree LaComb and Makenna Knight, have been sparkplugs for the Lady Cardinals, who are led by senior setter Taryn Doiron and junior hitter Demi Carter.

“It’s been great learning with Cambree and Makenna and playing with players like Taryn and Demi,” said Kelly. “Taryn is so amazing at setting us up. She sets the tone for the whole team, on and off the court. Taryn can also play every position on the court and is like having a coach on the floor. Demi, she’s unbelievable. She’s such a true force. I’m so proud of her because she committed to play at Angelo State recently. Taryn and Demi know what it is all about, because they have played so long. They really motivate us, and one of the best things is that they keep it fun.”

Coach Savanah DeLuna has thoroughly enjoyed the play of her standout freshman.

“We lost a great one in Harlee Tupper last year and we knew it was going to be tough early adjusting,” said DeLuna. “But then we started to realize what we have in Anna. She’s a lot like Harlee. She can play anywhere on the court and just makes things happen.”

Kelly is second on the team in kills behind Carter with 216. She has 79 aces, which ranks second behind Doiron. She also has 192 digs and 15 blocks.

“To see Anna grow this year has been so fun to watch,” said DeLuna. “She has such a high confidence level for a freshman. She’s so mature as a person and is so genuine. She’s a top-notch student and always carries a great smile. I’ve coached volleyball for awhile now and she’s one of the most coachable kids I’ve had. It’s going to be amazing to have her for three more years.”

Kelly, the daughter of Bridge City ISD Superintendent Mike Kelly, loves working on her game and has been doing it since she was in third grade.

“It’s just been my passion for so long and my parents have been a great support system, getting me to where I need to go to continue to play throughout the year,” said Kelly. “We’ve been to Orlando and Kansas City in the last year. I get about a month off, that’s when I work on my conditioning and weight training. Then I start playing club ball for Houston Stellar and a 15 Elite Team.”

Kelly, who is also a stellar student, watches the game even when she is not playing.

Kelly feels the Lady Cardinals will be a power for years to come.

“We have some good sophomores this year and our freshman class is simply amazing,” said Kelly. “We’ve got a chance to really be awesome for the next several years.”

Kelly has enjoyed her teammates so much this season and looks forward to the Lady Cardinals Class 4A Region III bidistrict playoff match against Liberty Tuesday at 6 p.m. at East Chambers High School in Winnie.

“I just love my teammates and as a freshman, they don’t pick on me very much because everyone is so young,” said Kelly. “They do call me ‘Anna Banana’, which is pretty cool I guess.”