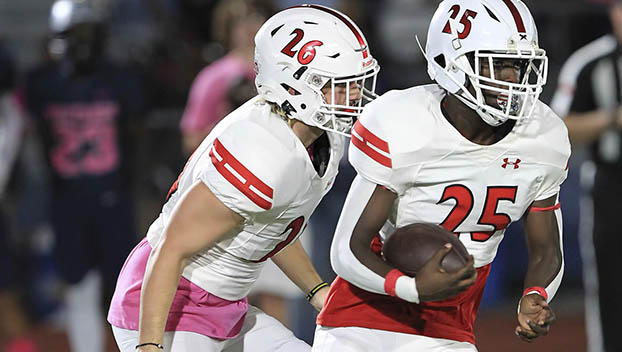 Bridge City running back Jemel Charles looks to run after getting a handoff from quarterback Noah Broussard against WO-S. (Mark Pachuca/Orange Leader)

SILSBEE — The District 9-4A Division II football clash between the Bridge City Cardinals and the Silsbee Tigers has been moved to 7 p.m. tonight (10.27) at Tiger Stadium due to the possible inclement weather that is expected to roll through the area Friday night.

The decision was made early Thursday morning between the two schools.

The BC-Silsbee game joins a long list of other games that have been moved to tonight, including the Kirbyville at Orangefield game.

Due to the inclement weather forecast for Friday, the District 10-4A Division I football battle between the Little Cypress-Mauriceville Battlin’ Bears and the Lumberton Raiders has been moved to tonight (10.27) at 7:30 p.m. at Lumberton’s Raider Stadium.

There will be no JV, Freshman, or Junior High games today. The districts will follow up with details if those games are rescheduled.

Other Southeast Texas games that have been shifted to Thursday night include East Chambers at Hardin, Buna at Tarkington, Deweyville at Sabine Pass, Coldpsring at Shepherd, Diboll at Huntington, Kountze at New Waverly, Colmesneil at Hull-Daisetta, Beaumont Kelly at Second Baptist, Leon at West Hardin, Groveton at Corrigan-Camden, and Joaquin at West Sabine.